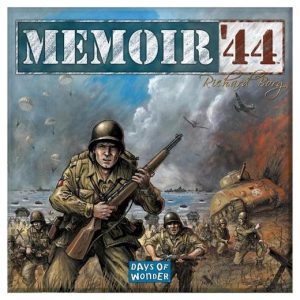 Memoir ’44 is a WWII war game inspired by the fighting on the Western Front in 1944. It includes a two-sided board (field and beachhead) and a stack of different terrain hexes that let you construct a series of different battles. Most of the fighting is between American and German armies, represented by two plastic armies of different colors. There are a couple of scenarios with British commandos and French Resistance for good measure though.

The board is divided into three sections: left, center, and right. Each player has a number of cards and alternate playing them one at a time, drawing a new a replacement at the end of each turn. Most cards will let you order a certain number of units in a given section (e.g. Attack Right – Issue an order to three units on the right flank). Other cards will have special orders that aren’t defined by their sector, like an Armor Assault (Issue four armor units an order). 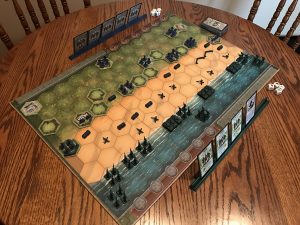 Battling happens by rolling a series of dice based on the unit you’re using and the distance from which you are engaging. You destroy enemy units by rolling the unit’s symbol or a grenade. A flag makes the enemy retreat. Stars are usually a miss, but certain cards such as Air Power will count them as a hit.

The goal of the game is to collect medals, usually around five or six. The first to collect the number of medals designated by the scenario wins. You collect medals by capturing and holding special objectives, such as bridges and towns, and by eliminating enemy units.

Memoir ’44 is a two-player game and each game takes about an hour to play. There is an option that lets you put two boards together to play what are called Overlord scenarios, which let you play with six to eight players. 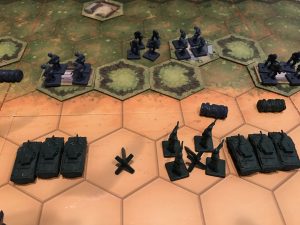 I really like Memoir ’44. It’s a fun war game that occupies a middle ground between being too casual and too involved. It’s short enough to break out without a major time commitment, but complex to give you a satisfying strategic experience. It’s fast paced without being shallow. This isn’t a full-fledged Axis and Allies type of experience, but it’s a very satisfying experience in its own right.

This entry was posted in Articles, Board Games and tagged Board Games, Review, Strategy, Tom, World War II, WWII. Bookmark the permalink.

4 Responses to Memoir ’44 – Board Game Review