In Dominion, players take up the mantle of feuding royals setting out to establish their own kingdom as far as the eyes can see. Dominion is a standard deck building game. Players begin with ten generic cards and then customize their deck to advance their personal strategy. When the dust settles, will you be the last one standing? 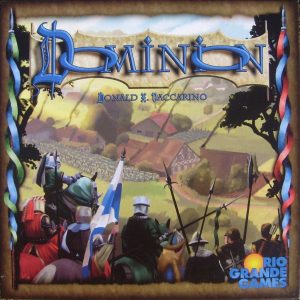 Players get five cards in their hand, allowing them to do two things per turn: one Action and one Buy. Actions and Buys can be performed in any order. It’s possible to buy cards that will give you extra Actions or Buys, which is a key part of the strategy in Dominion. How do players expand their capabilities during a turn? Buying cards that interact well and playing them in the right order helps you chain combinations that give you many, many more options.

The set-up is simple. There are six cards that show up every game, three Treasure cards and three Victory cards. Then there is a random selection of ten other cards that provide your Actions for the game. The Buy phase of your turn lets you purchase one of the cards from this selection and put it on your discard pile. Once you’ve played your whole deck, that discard pile will get shuffled into forming a new deck. 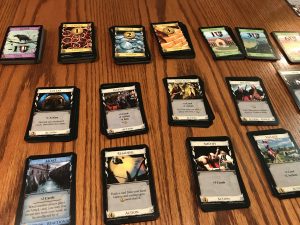 The Action phase lets you use one of the cards in your hand. Actions cane take various forms, such as support. If you play a Village, for example, you’ll get to draw a card and you’ll get two additional actions for that turn. Support cards like this help you get the most out of your turn. Other Actions attack other players. A Witch, for instance, lets you draw two cards and give every other player a Curse. Not only do Curse cards take up space in your deck, but they also cost you a victory point at the end of the game. So do you want to build yourself up? Tear others down? A bit of both? The choice is yours.

Victory is determined by points which represent land. Estates are worth 1, Duchies worth 3, and Provinces worth 6. The game ends when either all the Provinces have been bought or any three other card stacks are depleted. Whoever has the most points when the game is over wins.

Dominion is simple enough to pick up with ease and layered enough to keep you engaged once you do. Set up and clean up are both quick, so you’ll spend your game night actually playing games and not preparing to play. Dominion is a good staple for a game shelf and I come back to it often. Dominion gets two thumbs up from me.

This entry was posted in Articles, Board Games, Review and tagged Board Game, Cards, Deck Building, Review. Bookmark the permalink.

2 Responses to Board Game Review – Dominion