Settlers of Catan – Board Game Review 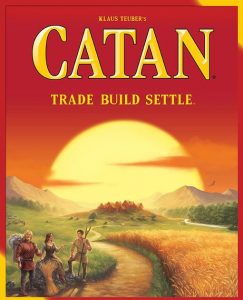 Settlers of Catan is a pretty straightforward game. You play as a group of settlers setting up on the fictional island of Catan. To do that, you’re going to have to compete with other players to collect all the brick, lumber, ore, grain, and wool that you need to build roads, settlements, and cities. The standard game can accommodate up to four players and it can be expanded for up to six.

Collecting these resources is pretty simple. Each tile produces a resource type (except the desert, which produces nothing) and each tile has a number on it. At the beginning of each turn, the active player rolls two six-sided die. If any player has a settlement touching one of these tiles, they get one of that kind of resource. If they have a city, they get two. Sounds simple, right? Well, just wait until you’re holding out for that one resource you need to finish what you’re trying to build.

Here’s where the game can get truly competitive. If a player rolls a seven, no one gets resources. Instead, players who have more than seven cards in their hand have to discard half. Then the active player places the Robber on a tile and steals a card from another player who is on that tile. As long as the Robber is on a tile, no one can get resources from that tile. 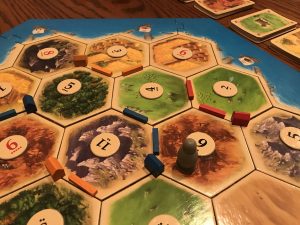 If you’re just getting into playing board games, I’d recommend Catan as a fantastic place to start. If you play games with children (10+ years old), this is a wonderful game to pull out. Seasoned board game players will outgrow it, in large part because of it’s dependence on the dice rolls. Even still, I come back to this game fairly often. Settlers of Catan isn’t the definitive board game but, in my opinion, it’s a must-own. No collection is complete without it.

This entry was posted in Articles, Board Games, Review and tagged Board Games, Catan, Review, Tom. Bookmark the permalink.