A Planeswalker You Can Count On! – A Standard Deck Tech with David Brewer

Posted on November 8, 2016 by Chris Kreitzman

With this year’s election nearing an end, the big topic of discussion was on merit of character. Finding someone that we could believe in to help guide us to our next point as a country. And while that could lead to a whole can of worms debate, what we do know for certain, courtesy of her 4-0 Victory at the hands of David Brewer during our Sunday Game Day Event in October, is that Tamiyo is a Planeswalker with a purpose in this new Standard.

I got together with David to ask him a few questions about the format and the deck he piloted to get his impression on where the game is currently and what he thought about his choices after the fact. 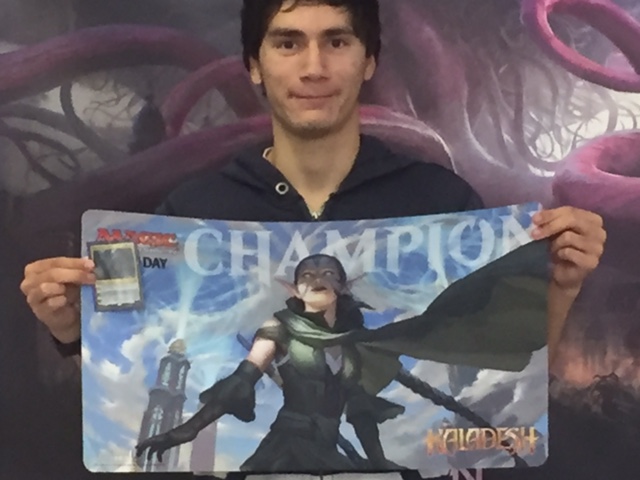 Interview with the Champ!

So I know you have a passion for Tamiyo, but what else about the list made you decide to play this deck for Game Day?

What made me choose to make this deck, other than Tamiyo, was the value and synergies the deck has going for it. Upticking Tamiyo on a Sylvan Advocate is just gross when it stands around on the block and draws you two cards. Gisela, the Broken Blade was also another big reason why I made the deck. Her 4/3 body is not as good as her big sister from M11, Baneslayer Angel, but the chick herself does an awfully good impression, as well as being an 8-point life swing if it connects!

With the meta the way it is now, after a Pro Tour and a few notable events, do you think there are any changes you would make to the current list?

With the meta now leaning towards control decks and race cars, I feel the biggest change I need to make is something I can’t change right now; That being a reprint of Disenchant/Naturalize (a white version in particular for this deck). The access to an instant speed removal of my opponent’s Smuggler’s Copter on two mana would be very strong. A disenchant can also stop a troublesome card for the deck in Fevered Visions. Since the deck is about raw Card Advantage and not Card Selection (like the scooter gives you), it really taxes us if we try to play the Aggro/Control route.

Which match ups do you think you have a favored chance against?

The Matchup I think this deck coasts on through is the RG Energy or “Poisonless Infect” deck that focuses on “Giant Growth-ing” a creature and trying to one shot you in the early game. The deck runs a full array of removal, from Reflector mage to Stasis snare, and even main deck board wipes with Planar Outburst, so it is easy to prioritize stopping their early game all-ins. Tamiyo also stifles the plan on trying to all-in us with her -2 ability to frost up to two target Nonland permanents until your next turn. Against that matchup, it’s basically a time walk due to their beaters being unable to swing on their next turn.

Which match ups do you feel you need to devote more sideboard space to?

The matchup I think this deck’s weaknesses hit is the Blue/Red/x decks with mainboard Fevered Visions and/or Deadlock Trap. Visions stops raw card advantage decks from really going crazy, while the deadlock trap isolates a creature OR planeswalker.

Another matchup I think is hard to beat at this time would be the graveyard based decks, whether it be GB Delirium or Gearhulk “Robo Reanimator”. The fact that there is not a way to remove the graveyard entirely gives them the edge over our Tam Tam team.

What advice could you give to other players thinking about piloting this deck at our next Standard Event?

Remember the deck’s main focal point is going to value town with Tamiyo:

+1 can either target your guys for guaranteed draws OR fend off your opponents by choosing their creatures (giving away free cards for a few points of damage really adds up in our favor!)
-2 we have already discussed as it is a good equalizer when you are behind and a gruesome punisher when you are ahead. On game day it definitely came in clutch against the RG deck and stopping Aetherworks Marvel from doing practically anything.
-7 is worded as Draw three cards. You get a emblem with “You may cast non land cards without paying their mana costs.’ What is should really read is -7 you win the game; it’s practically that good. I have so many fun and interesting stories on the amount of crazy things that have happened after the ultimate. (You can see me at the shop for them!)

Another key card in the deck is Part The Waterveil. Taking a generic extra turn usually just reads 6 mana “Explore“ with the upside of untapping lands. Other times in this deck, it reads “Take another turn, generate more card advantage with your planeswalkers, draw more cards with tamiyo, create more life swings with Gisela and commit more to the board”. The card at worst is just an explore and can range from (x) amount of extra combat steps to melding together Gisela and Bruna.

The last key card in the deck is the one of Kiora, Master of the Depths. The merfolk Planeswalker got a really bad wrap in its original printing, due to its low starting loyalty. What Kiora allows us to do in this deck however is swing with any of our non-Vigilance creatures and use her ability to untap the creature and a land. Kiora is also why we use the board wipe Planar Outburst. If we awaken the spell, we can net two mana off her untap ability! Her -2 ability is also pretty clutch in milling four cards to return a land and/or creature, which allows us a lot of flexibility. The ultimate “feel good play” is to minus a Kiora and dump either part of the “Angelic Twins” in the grave to pick up and meld for victory!

Thank you so much David for sharing your thoughts on this amazing deck! It’s great to see people thinking outside the box in this wide open metagame that Standard has provided for us with Kaladesh’s release.

Keep your eyes peeled for more interesting decks as we explore the format, and make sure to try to avoid this powerhouse deck if you can at our local FNMs!