Hey fellow Cardboard Magicians. What I’ve got for you today is the first article in a series designed to help folks break into the Modern format.  We’re going to be looking at decks that can be built on a pretty tight budget, focusing on fringe decks that can take down an FNM for a player that wants to try something different, or slightly budgetized Tier 1-2 decks to help a newer player build up to a top tier Modern deck.

Our focus today is on one of the scariest decks in any format in which it’s legal, Infect.  Infect has been around in Modern for a while and it had a breakout performance at Pro Tour: Fate Reforged.  The U/G list utilized then has changed very little since the pro tour and can be found pretty easily.  We’re going to start with a Mono-Green version, that can be built over time into the more resilient U/G version that’s been consistently finishing Top 8 at Grand Prixs and SCG Opens. 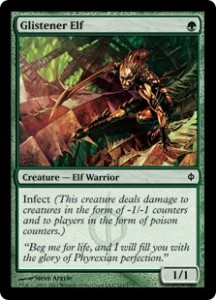 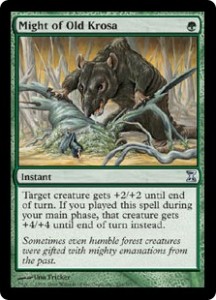 2 Revenge of the Hunted 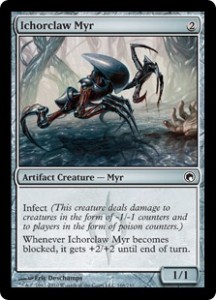 
The Mono-Green Infect deck is a lot less vulnerable to burn decks than it’s two color counterpart because of the lack of a fetch/shock manabase.  There are a lot of ways to quickly upgrade this deck, and we’ll touch on some of those at the end of the article.  For now lets take a quick look at some of the different things we’ve got happening.

The Creatures – We’ve chosen the 12 most efficient infect creatures available to us in a mono green deck.  Glistener Elf comes down turn 1 and allows for sur
prise turn 2 kills,  Ichorclaw Myr is incredibly difficult to chump block, and Blight Mamba really doesn’t want to die. 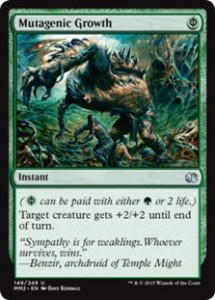 The Instants – Infect is all about getting into the red zone and trying to g
et a quick kill via pump spells.  Turn 2 and 3 kills are not particularly rare if your opponent has no interaction. If you’ve got some combination of 2 Might of Old Krosa/Groundswell plus a Mutagenic Growth you’re sitting on 10 poison waiting to happen. These all do basically the same thing: give you +2/+2 unless you m
eet a specific criteria, in which case you get +4/+4 and/or some form of protection.

The Non-Instants – The rest of our pump spells function differently, but they all serve to make our other pumps even better. 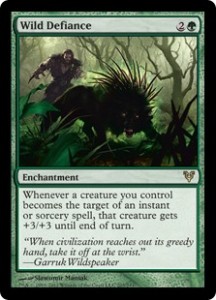 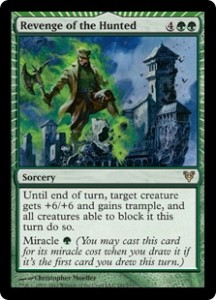 So there’s the theory behind the deck, let’s see how it works in practice:

3-1 is not a bad showing considering the decks we played against and some of the glaring misplays on my part. Mono-Green Infect definitely has the chops to compete at a Friday Night Magic level event.  It’s not going to have the resilience of it’s U/G counterpart, but we’re trying to end games on turn 2 for less than 100 dollars, so having a bit of a glass cannon feel isn’t the worst thing in the world.

A couple of notes on the sideboard. Between matches 1 and 2 I switched out Guttural Response for Autumn’s Veil when I realized how much more expensive Guttural Response is on paper than it is on MTGO. Naturalize in the board is a mistake;  Nature’s Claim is a 100% improvement, and is also extremely inexpensive.

Where do we go from here?

There are a large number of directions we can go to make this deck even better.  The biggest impact would probably come from adding Noble Hierarch a 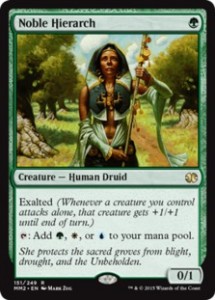 nd/or Inkmoth Nexus.  Noble Hierarch allows us to cast our two drops with mana up for protection and the exalted trigger eliminates the need for a mutagenic growth, allowing for a kill with only 2 pump spells.  Inkmoth Nexus is also very good, as it has built in evasion, and dodges sorcery speed removal.  Other more budget options are Gitaxian Probe and Rancor.  Any green fetchlands already in your collection could be easily added to the deck, which when coupled with Gitaxian Probe would help to enable Become Immense which is absolutely amazing in this deck and make Groundswell even better.

This is a great entry level Modern deck for someone looking to dip their toes in the format without diving in and spending a paycheck or more on a single deck and is a great stepping stone to a Tier 1 deck.  It’s a little fragile, but lightning fast, and can be built on a very tight budget (which can be cut in half by using Giant Growth or Titanic Growth instead of Might of Old Krosa).  Total cost on www.TheEndGames.co for the above decklist: $72 with sideboard

If you have suggestions or ideas for a deck you’d like to see featured, feel free to let me know in the comments below or by emailing to nuckster00@gmail.com.