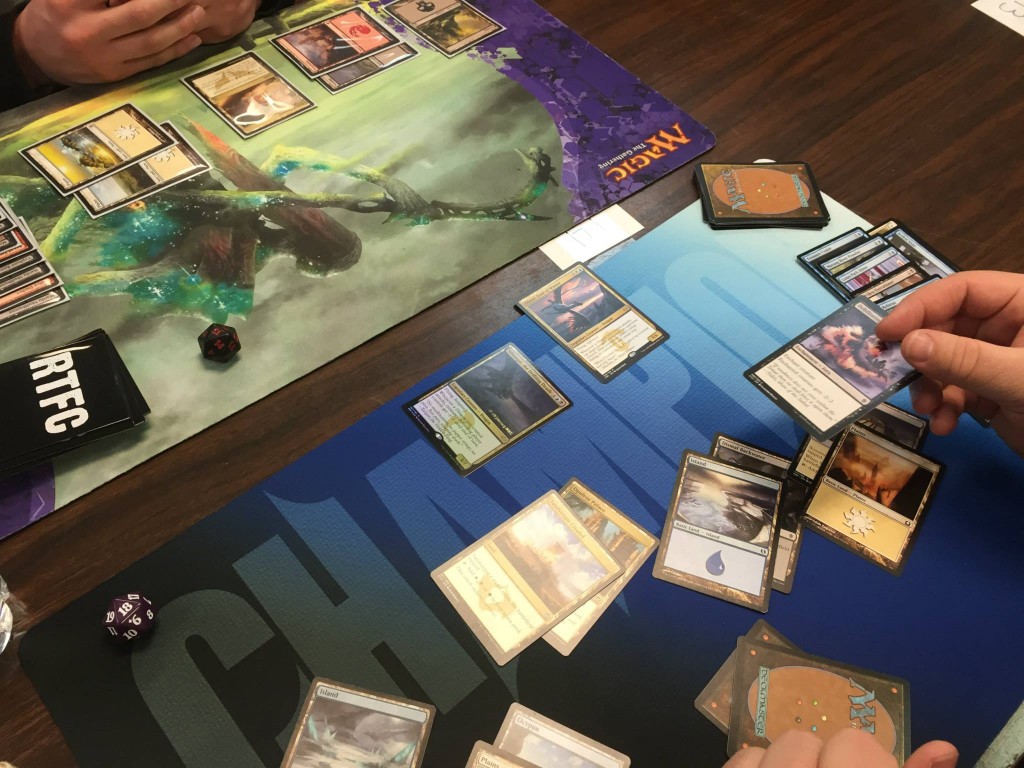 Ever since I was exposed to the format, cube drafting has been my favorite way to play Magic. I love having access to a very different type of deck every time I sit down to play, and there is also something special about constructing a deck one card at a time. A cube, for those who are not familiar with it, is a large collection of Magic the Gathering cards that players will make packs from and then draft the same way a booster draft is done. The major downside to any sort of drafting format is that it requires eight people to be done correctly. Gathering together that many players is not something most people can do quickly. For the past few years my friends and I have been getting together and drafting with only two to four people, and we have come up with a few solutions to the problem. I would like to share the more successful ones. Hopefully this will help everyone be able to draft with their friends more easily and often. Keep in mind that while these formats are designed with a cube involved, most can be adapted for booster packs.

First let’s look at the pros and cons of a normal 3 pack draft to see what problems we are trying to fix for small drafting groups.

So it seems that one of the major problems here is that players don’t see enough cards with just three packs. The simplest answer is to give more packs to the players. This eventually led to what I call the “Half Pack” draft.

The Half Pack draft is a little confusing the first time around, but it is easy to pick up because it functions similarly to a normal draft. To set up, each player makes seven packs of twelve cards. Each player will take their first pack, select a card, and pass the remainder to the left as normal. This will continue until each pack has only six cards remaining. Instead of passing a pack of six, the players will set it aside from the draft and start another round of packs. The second pack goes to the right until it reaches six cards. Set it aside again and begin a new round of packs. Rinse and repeat until all the packs are set aside. Now everyone has forty two cards and can begin constructing their deck. Players new to this draft will be surprised how many more options they have in their draft pool. This is because they do not waste picks on cards that will do nothing for their deck, which is normally what they get from the packs with four or less cards. The great thing about this draft is that everyone sees almost double the amount of cards they would in a three pack draft with the same number of people. This opens up the draft greatly. Everyone can get a strong deck with a solid curve. Players can even share colors. Better decks lead to Magic that is more fun for everyone.

The main downside to Half Pack drafting is that it can be time consuming. When my friends and I are looking for something a little faster we do a Pile draft. The Pile draft is essentially a Winchester draft adapted for cube and more than two players if necessary. To draft this way collect fifty cards for each player, and shuffle them together. If there are only two drafters they will be creating four piles. If there are three or more they will create as many piles as there are players. At the start of each drafters turn they will add a card to each pile, then choose a pile to remove and add it to their pool. This continues until all of the cards are added to piles and each pile has been selected. This format is less consistent than the Half-Pack draft, but it does go by quicker. It can also be a nice change of pace.

Sometimes, instead of wanting to draft quickly, my friends and I have a whole afternoon to kill and want to do something a little more time consuming. So we’ve come up with the “Fact or Fiction” draft. Based on the card of the same name this format is very similar to a Solomon draft with exceptions for an odd number of drafters. Each player starts with five packs of 10 cards. The first drafter will open their pack and sort it into piles equal to the number of drafters. The drafter to the left will choose a pile first and this will continue until the player who made the piles gains the last one remaining. Then the player to the left will open and make piles the same way. After a full cycle has been completed the pick order for piles can be rotated (the player on the right of the opened pack would pick the first pile) if there are more than two players. As normal, continue until all the packs are gone and then players construct their decks. This draft format can take the longest by far. But that is part of the fun. There are a lot more decisions than in a normal draft. Which leads to some interesting decks, and some interesting match ups when the games start because players have a good idea of what their opponents game plan is. The Fact or Fiction draft is not for everyone, but I recommend giving it a shot.

These are the three best ways my playgroup have come up with for small sided cube drafts. There are a few more goofy things we do, but those deserve not only their own article, but also a good amount of tweaking before they are ready to be explained coherently. I hope this has given you a few good ideas and inspired you to get some friends together to play! More magic more often is always a good thing. Thanks for the read, and happy drafting!