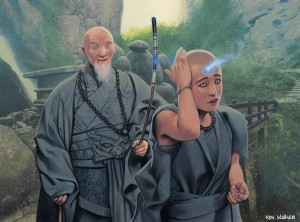 It’s Friday night after FNM and I’ve just 0-3’d, which, as a returning player, can be disheartening, but I choose to remain upbeat. I went 0-2 in matches one and two and 1-2 in my third match. It’s as close to the worst I could have done without actually doing the worst. I will definitely attribute some of this to pilot error and poor sideboarding (not bring in my two Rending Volleys against mono-white…WHY?). But my deck also performed poorly. It wasn’t bad in that it was playing bad cards (except for Temur Charm, but we’ll get to that), rather, it was bad because it lacked focus.

3 Heir of the Wilds

So yeah. What is this deck trying to do? It has some ramp in the Mystics and Coursers but Heir of the Wilds and the Surraks and Knuckleblades just want to beat down. The burn in the deck is fine, though I ended up taking out the Crater’s Claws and Roasts for Arc Lightnings and Wild Slashes a lot since I played against two tokens decks. Frontier Siege is good but there isn’t enough good stuff to ramp into in the deck. The best thing it did was make Crater’s Claws lethal in the one game that I won, but since I never drew Dragonlord Atarka, it ended up being superfluous. Temur Charm is also the worst charm by far and I played four. I did effectively Mana Leak an Elspeth with one but the card just doesn’t provide enough value to justify its awkward casting cost. I also only played 23 lands, which might be low for a deck with four Coursers. But the largest problem really, and the reason I think I did so poorly was that this deck lacks a game plan. Which is a good lesson. Additionally, I think Temur is not exceptionally well-positioned in this standard environment. The blue/gold cards just don’t synergize well enough with the red and green to justify their inclusion, though if you were to double down on Temur and play Icefall Regents and Sarkhan Unbroken with another Atarka, that would be a little better probably.

However, a Red-Green version of this deck which cuts blue entirely, adds more burn, another Thunderbreak Regent and swaps out the Surraks and Heir of the Wilds for another Atarka and 4 Sylvan Caryatids and adds Shaman of Forgotten Ways in place of the Savage Knuckleblades would be a much better deck. This was not the deck I chose to player, however, and I got wrecked. But it was fun and a learning experience. If tonight had a lesson, it was HAVE A GAME PLAN. This can’t really be stressed enough. Each of my opponents had focused decks. The first two rounds were straight-up make tokens, kill things, beat down. The deck in round three (which I can hopefully do a tech on in the future) was more out of left field but it still had a focus, this time it was Morphs and Manifests of various flavors.

So on a lighter note and in the spirit of better deckbuilding, I conducted a short exit interview with each opponent and I have included a bonus Deck Tech on a particularly spicy brew I saw in action. (Note: Interview answers have been paraphrased for brevity.)

My first round opponent was Logan Powell

A: Mardu Token Dragons. (He had Thunderbreak Regents, I believe.)

A: Being able to throw Butcher of the Horde at people.

Second round I played against Leah Hicks

A: The synergy between goblin tokens and Stoke the Flames.

A: Drown in Sorrow.

Finally, my third round opponent was Joseph Tignor

A: Manifesting then unmorphing Master of Pearls (AKA Master P).

A: Meteorite, because of its flavor text.

Finally, I have a brief Deck Tech with one Harlan Firer which I knew I had to do after seeing him play the deck.

4 Haven of the Spirit Dragon

If you couldn’t tell from looking at it, what this deck is trying to do is jam a Dragon into play as soon as possible and then continue jamming until your opponent dies.

This is an example of a deck with a game plan. It begins with the ‘mana dorks’ like the Shamans, Mystics, and Caryatids who accelerate you either into one of your dragons or into the Whisperwood Elemental who can manifest your dragons. You have the four Haven of the Spirit Dragons making removal pretty bad. You also have the glorious mana curve of Elvish Mystic into Sylvan Caryatid into Dragonlord Ojutai into Dragonlord Dromoka into Dragonlord Atarka into Ugin, the Spirit Dragon. Though they’re probably way dead by the time you get to Ugin. It’s a sweet deck, for sure. Harlan said it’s the first time he’s played a non-Jeskai deck in Standard in a long time, meaning, presumably, that he thought the deck was so good that he was willing to move away from an archetype and style with which he was very comfortable.

I asked him the same questions I asked my opponents.

A: Actually being able to cast Dromoka fives times in one game.

All in all, even though I got eviscerated, I had a ton of fun and learned something important. I saw some pretty cool brews that I didn’t get time to cover but might in the future. I will hopefully be able to do a Deck Tech for each FNM report, provided that there is a spicy enough build each Friday. If you have a sweet deck you’d like to see featured…build it, play it, I might see it. Until then…