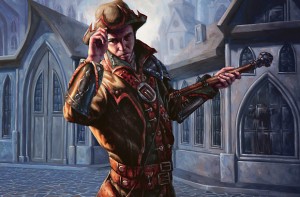 Hi, I’m Zach and this is the first installment in my new series of Magic: the Gathering articles. This also happens to be my first ever MTG article, and I am therefore super thrilled to be able to write about what I believe is the most well-designed game of all time, from what I hope is a unique and insightful perspective.

To start, a little bit about my history with the game. My first experience with Magic came in the form of an 8th edition 2-Player Starter Set which I received in between the printing of Scourge and Mirrodin, so 2003. I sort of learned the rules (I knew how summoning sickness and lands worked) and began playing casually the way every kid my age played: with a stack of all of the cards I owned. Mana curves and and mana bases were not a concern. I remember seeing Krosan Cloudscraper (a lot of you might have to look that one up) for the first time and thinking it was the best card ever. I mean, a 13/13 for ten mana and a bunch of other stuff I didn’t understand about upkeeps and morphing? How could they print this? I now know that if you somehow did survive long enough to cast this card in Standard, your opponent would probably just kill you with those millions of tokens they spewed out with a Mirari’s Wake (maybe have to look this up too) boosted Decree of Justice (and this one). But back then I was a confirmed Timmy (for those unaware of the Timmy, Johnny, Spike player profiles used by Wizards of the Coast’s Research and Development team, see Mark Rosewater’s enlightening article http://archive.wizards.com/Magic/magazine/article.aspx?x=mtgcom/daily/mr11b) and I didn’t care if I lost a lot. I probably did. I played some FNMs at the End and bought cards, mostly as a collector and a fantasy nerd until around Ravnica, when my interest in the game waned and I stopped buying cards.

Fast forward to 2011. It’s my junior year of high school and I’m sitting in study hall when I glance over at a casual friend who is sitting next to me sorting through his Mono-Green Ramp deck and I mention that I used to play. He offers me another deck he had in his backpack — Mono-Red Aggro, I think — and my passion for Magic was once again ignited. I set about buying a deck which I now know to be terrible: Mono-White Angels. It had some good stuff, like Iona (which I, of course, traded before it became actually valuable), but was still quite bad. But it was fun. Some other Magic-playing friends joined our study hall and we eventually were able to have four-player multiplayer games. My original Mono-Green friend, Thomas Cude (shoutout to Tom if you’re still out there playing magic — thanks for bringing me back into the fold), had moved onto a Hedron Crab, Jace’s Erasure, Traumatize Mill deck. Another friend was playing Imperious Perfect Elves because we didn’t limit each other to Standard-Legal cards — it’s not like anyone was going to walk in one day packing Force of Wills and Moxes anyway. This casual arrangement led me to play at an FNM or two (luckily dodging Jace, the Mind Sculptor, though still losing plenty) and the New Phyrexia prerelease where I think I went 1-2 or something in sealed despite opening Elesh Norn and of course trading before it became a Modern staple. We had a lot of fun though. We even set up a school-sanctioned Magic club, which I had forgotten about until I sat down to write this article. Then summer came and like so many great things (cue wistful music), our study hall playgroup dissolved and by the time Innistrad rolled around, I no longer felt the urge to turn cardboard sideways.

Now I am twenty-one. I have a renewed interest in Magic, specifically at a more competitive level, though I will never forget the pure fun of casual play. I have been given a wonderful opportunity by the End Games to write about something I love and share it with others. These are the stated goals of my articles: to learn about Magic, to grow as a player and to help others to do the same. My primary audience is probably players who are new to or who are returning to the game. To them I say WELCOME or, WELCOME BACK. For those who are more experienced, I hope I can still provide valuable insight into the topics I cover, which I expect to be wide-ranging. These may include: Standard, Limited, Cube, Pauper; Legacy, Vintage and Modern if I can acquire the cards, Deckbuilding as a Creative Exercise and also as a Path to Victory, Play Technique and anything else I find interesting about Magic. I hope that I can help some people, including myself, improve as players and deckbuilders while never forgetting the main reason we do any of this at all: because Magic is ridiculously, ludicrously, absurdly, FUN.

This entry was posted in Articles, Magic The Gathering and tagged Bio, Civilized Scholar, MTG, Zach. Bookmark the permalink.