Some characters do one thing and they do it really well. The Flash moves really fast. Hawkeye shoots arrows at people. Power sets like this are pretty easy to make in Heroclix. But what about characters that are more complex? What about the ones who can walk and chew bubblegum at the same time?

There’ve been a few ways to make characters like that. The most common one has been to jam all of their powers and abilities on a single dial, which usually comes with a hefty price tag. Anybody remember that 200-point Batman?

Last year World’s Finest gave us a new way – Shifting Focus. World’s Finest had four different  Batman and Superman pieces that were connected with each other. Each dial reflected a specific power or ability (e.g. super speed, stealth) and all shared a trait that allowed these pieces to be swapped out. Last month’s Deadpool and the X-Force brought this mechanic back and this summer’s Avengers/Defenders War promises even more. Since it looks like Shifting Focus is here to stay for a while, let’s take a closer look at it.

How Does It Work?

Shifting Focus characters have some version of this trait:

SHIFTING FOCUS – X: Give X a free action if he began your turn on the map. Replace him with another character with this trait on the same click number. 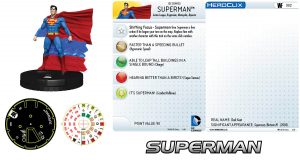 Overall, I’ve had a fun time playing the Shifting Focus pieces and I’m looking forward to their future. How about you? Have you tried any of them yet? Is this a good direction for complex characters or not?