If you haven’t heard about the results of the first tournament in Kaladesh Standard, allow me to sum it up for you briefly. 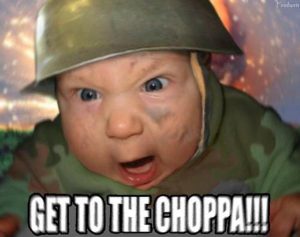 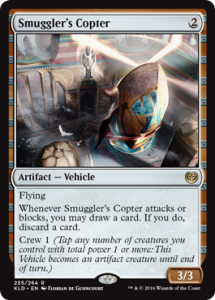 32 out of a possible 32 copies of Smuggler’s Copters appeared in the top 8 of the SCG Indianapolis Open. There are a few conclusions to be taken away from such early dominance of a card. While parts of the MTG community are declaring that the sky is falling, and that aggro is the only viable strategy, I don’t think these results are as emphatic as they at first seem. I think there are 3 major reasons for  Smuggler’s Copter‘s breakout success.

1- The card is good. It’s not broken or ban-worthy, but it’s really good.

2- Aggro is always a strong strategy in a new metagame. It takes a few weeks for other decks to get their lists correct and removal packages tuned. Until then fast, consistent decks will win quickly, and regularly.

3- A large percentage of the field just was not prepared for vehicles or even a fast aggro deck.

This brings up a huge element of Kaladesh Standard; instant speed removal is essential to dealing with vehicles. It has been a long time since a pure aggro deck has put up any real results, and vehicles are a completely new card type. So it makes perfect sense that people weren’t quite prepared. The early rounds were filled with decks that had only sorcery speed removal. That was perfectly fine in the GWx mid-range Collected Company metagame, but it won’t cut it now. The three removal colors (White, Red, and Black) have viable instant speed options, it just means a little bit of a shake up in card choices. So I do not think that Smuggler’s Copter will be over represented in the Pro Tour. It’s a threat, a very strong threat, but it dies pretty easily to opponents that are prepared. 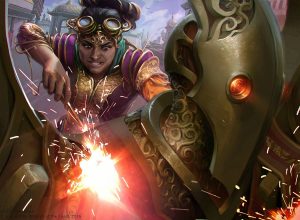 There are a handful of cards I expect to see come into their own during Pro Tour Kaladesh, or soon thereafter. Incendiary Sabotage looks great. It can kill anything except a Skysovereign, Consul Flagship out of the SCG open winning W/R Vehicles deck. It also can get rid of Scrapheap Scrounger, Prized Amalgam, and Haunted Dead. Authority of the Consuls is a card white control decks may be interested in, at least for their sideboard. It gains some life and stops opponent’s creatures hopping behind the wheel of a copter or a cruiser the turn they enter play. Thalia, Heretic Cathar does a lot of the same things, and can participate in combat, but she dies to almost any removal spell in the format. Kalitas, Traitor of Ghet is a scary dude. He blocks, makes zombies, and gains life. All these abilities in one card is a great deal. He should certainly see more play if there is any form black control decks. And last but not least, Verdurous Gearhulk is a big guy that makes your other guys big. Kind of like Wolfir Silverheart but shinier and better at sharing. Verdurous Gearhulk is not the sort of card that excites me personally, but lots of power and toughness has been the best strategy in Standard for a while now. 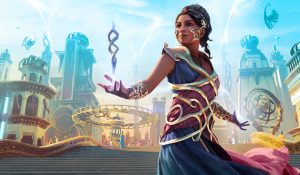 There are lots of exciting things to look forward to in the upcoming Pro Tour. New strategies should be everywhere. I’m really hoping to see somebody cast an Ever After or two. But the thing I’m most excited about is that we’re playing Magic on turn 1 again. With aggressive strategies back in the mix, every deck will have to lower their mana curve to survive. Which means faster, more interactive games. All of which will hopefully be fun to play, and fun to watch!