A love letter to Sylvan Advocate

Posted on February 17, 2016 by Jamie Butterworth

Ya know, sometimes there’s a card in a new set that really sets my synapses to firing. A card that sparks my imagination and sends me spiraling into a deck creating abyss which I find a hard time escaping. However, rarely does such a card live up to my dreams and expectations. If you read my previous article going over the cards I was excited for in Oath of the Gatewatch, you’d notice that Sylvan Advocate was one of my top five green cards and that I saw limitless potential in what I dubbed to be a “Tarmogoyf Junior”. At that point my ideas with the card were purely in the realm of the hypothetical, where most of my ideas about decks stay unfortunately. However…I rode Sylvan Advocate all the way to a Gamesday win. 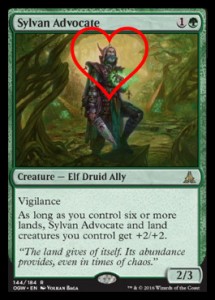 Before I get into a lot of details with this card as well as a deck idea that would make it the star, let me give you the Decklist that won me the day:

As you can see, my deck was geared for a one way ticket to value town. Ayli helps me trade up with an opposing creature or gain life off of my creatures that would be removed, offering protection to cards like Deathmist Raptor and Anafenza if they were to be targeted by Abzan Charm or other RFG spells. This of course pairs well with Matter Reshaper, who easily replaces himself, either by dropping another creature or land in his place or drawing you an additional card such as Collected Company. I’ll fully admit to not being the strongest sideboard designer, but I’m working on that, and my choice to pack Evolutionary Leap likely won me the day.

So let’s talk about Sylvan Advocate’s role in this deck, and how he alone was the reason for my victory. There’s no better way to illustrate this than by going into detail over the match I had at the end. I was playing against a friend of mine who had built a nasty Mardu Green deck that was driven on the back of Siege Rhino, Goblin Dark-Dwellers, and a metric ton of removal spells. He won Gamesday on Saturday at an out of town store, but he got greedy and wanted to win a second one on Sunday. It was my job to put a stop to that.

The deck shorted me on land the first game, and I wasn’t able to get anything going because of it. But games two and three were knock down, drag out fist fights where my deck performed optimally despite a couple of significant hurdles. I thought I was going to go out early in game two, and end on a handshake. My opponent was up to forty life while I was down to five thanks to a Soulfire Grand Master with tricks like Roast, Crackling Doom, and Kolaghan’s Command paired with Siege Rhino to keep up the most oppressive board state. A timely Collected Company that turned up Reflector Mage and Sylvan Advocate helped to get me back in the game as I had an Abzan Charm to wipe his rhino off the table. Evolutionary Leap was my next play which essentially blanked his absurd amount of removal, and swinging each turn with a 4/5 Shambling Vent to gain four life thanks to the Advocate, as well as the Advocate being a 4/5 vigilance himself, helped me drive back and end the game at twenty nine life. 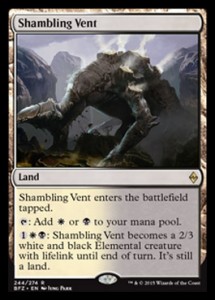 Game three was also a long drawn out battle, but my deck performed optimally with an early Evolutionary Leap to make sure I got every bit of value out of each of my creatures. He cast Infinite Obliteration three times (twice normally and once with Gobling Dark-Dwellers), calling out Deathmist Raptor, Den Protector, and Anafenza, cutting nearly half of the creatures from my creature based deck, but I still had Sylvan Advocate and Shambling Vent, and that’s all I needed in addition to backup from Duress, Dromoka’s Command and Abzan Charm to carry the day. He should have knocked out the Advocate with one of the Obliterations, but in fairness, most of the creatures in this deck present significant threats. There wasn’t a big life gain race this time, and I was able to skate by with a sweet, sweet victory.

You can see from my experience why I would come to love this card so much. At absolute worst he’s a 2/3 vigilance creature on turn two, which makes him a pretty freakin’ solid bear as it is. Then come turn 6 (or sooner with ramp) he’s a 4/5 vigilance menace that calls out to Zendikar itself to punish your enemies with all the fury of a raging Jokulhaups. You can call me crazy, but I definitely AM going to directly compare this card to Tarmogoyf. Look, what makes Tarmogoyf so great is that it’s an incredibly powerful card for a low cost, often being a 3/4, 4/5, or even larger fairly early on for only two mana. He dies to removal, but what doesn’t? Tarmogoyf is a hell of an attacker, and one of the best green cards to have ever been printed. Maybe I’ll be able to afford a playset somewhere around the twelfth printing of him. Tarmogoyf gets better as the game goes on, eating more card types and becoming more and more threatening over time. 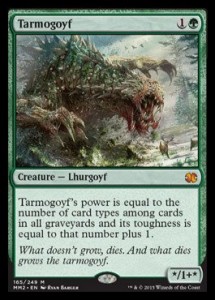 Now let’s look at the Advocate. He will ALWAYS be a 2/3 for two mana on turn two. With vigilance. I feel that’s a key trait for the card as he’s a solid early attacker that can also protect you on the back end from smaller creatures and tokens, while surviving damage spells like Wild Slash, or a non-spell mastery Fiery Impulse. He’s not going to survive a Lightning Bolt in Modern, and he’s not going to take an opponent by surprise that failed to count card types in graveyards before casting that Lightning Helix to remove him. With a little bit of land ramp the Advocate could easily be a 4/5 vigilance attacker on turn four or sooner, but that’s only when the fun begins. People neglect the second part of the card where ALL of your land creatures get +2/+2. That goes for man lands, lands animated via special cards like Elemental Uprising, or any number of Awaken cards. Allow me to show you a deck that popped into my head earlier today while thinking about this article. I don’t know exactly how good this will be, but it’s hilarious in my mind, and I’m seriously considering making it myself. If you make a version of this (or have made already) please let me know how it goes! So let’s look at the decklist.

You may think I’m a crazy person for this deck, but hear me out. So Sylvan Advocate says that all of our land creatures get +2/+2, so we want to both turn our regular lands into creatures, as well as have man lands that can do our dirty work also. Let’s go to magical Christmas land and talk about how our optimal game will be. Consider this: 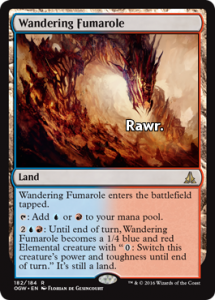 Honestly this isn’t even that outlandish. We only played four cards that weren’t land drops, and if our opponent played a fetch land and couldn’t remove our advocate, they’re dead. And if we play a second Advocate, we’re got an 8/5 Wandering Fumarole, or a 7/7 Lumbering Falls, or maybe we awaken another land and we’ve got a regular Forest beating them in the face for 7. With the exception of Clutch of Currents, you’re basically playing a glass cannon deck along similar lines as something like Atarka Red. But hey, that’s what the sideboard is for!

I feel like Sylvan Advocate has a VERY bright future in standard, and he can break games wide open in limited if you happen to draft one. If you didn’t notice, the Advocate also has two very important creature types: Elf and Ally. Flexible! I don’t know if this card will be a hit in any other formats, but I will definitely try. This guy is flying under the radar right now, and I think he’s one impressive on camera display away from becoming a runaway hit overnight. I’m telling you, if you’re a green player you need four of these. Immediately.