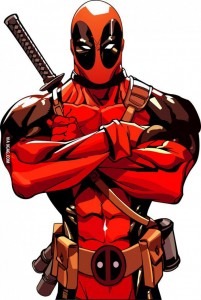 In honor of his big screen debut (We’re ignoring X-Men Origins: Wolverine), let’s take a look at the Merc with a Mouth. Love him or hate him, Deadpool has a following and he’s popped up just about everywhere in Marvel Comics. The most recent Deadpool is from 2014’s Deadpool set. So with that, let’s look at DP019a Deadpool.

This is a versatile Deadpool. You can play him at 135 or 90 points and he has a wide selection of keywords. In my opinion, I always opt for his 135-point dial over his 90-point dial when I can make it fit. I appreciate the 11 attack, 4 damage, and Running Shot. Also, don’t miss his 8 range. Deadpool has a much larger strike zone than most of your opponents will expect.

Deadpool is the Merc with a Mouth for a reason. He hardly ever stops talking! In homage to this, 019a Deadpool has a Word Balloon ability. For no additional cost, Deadpool can attach a Word Balloon and swap them out with a free action. There are twelve to choose from, so this feature offers you some great flexibility. Some of my favorites are:

There’s a quick look at Deadpool. Now let’s see what kind of trouble you can cause with him.

Use Blind Al to Perplex up Deadpool from the safety of your starting zone while Deadpool and Taskmaster go out into the field. Between Blind Al’s Perplex and Taskmaster’s Enhancement, Deadpool has the potential to deal some serious damage. To dissuade people from attacking Deadpool, I would use the Thunderbolts ATA to give Deadpool the Mystics team ability.

This team is pretty straight forward. Use Elektra to get up in your enemy’s face while Deadpool and Punisher take shots. Mercy is fragile, so try to keep her out of the fray. But for 50 points, she gives you a lot of support powers: Telekinesis, Barrier, and Probability Control.

Cable and Deadpool are their own dysfunctional duo, so how can you not play them together? This team is packed with support. Pete and Cable give you Outwit. Domino and Cable give you Probability Control. Later in his dial, Deadpool gives you Outwit and Perplex. The X-Force ATA gives everyone Improved Movement: Ignores Hindering to make sure you get where you need to be.

If you’re looking to build some zany teams or rehash your favorite movie quotes, here’s an excuse. Break out DP019a Deadpool and have at it!