Posted on January 20, 2016 by Jamie Butterworth

Welcome to the first of what will hopefully be many more articles from me, where I focus on a particular Commander deck and offer budget suggestions in order to improve how that deck operates, without making your wallet cry. My decks tend to be more casual and multiplayer focused, as that’s my preferred play style.

From the moment I first learned about Commander, I knew it would be my favorite format. What’s not to love about a format where you really get to flex your deckbuilding skills, working within the framework of a single card that sets the tone for a one hundred card singleton deck? Therein lies the main problem for an avid commander player: how do you choose which deck to focus on, especially when you’re on a budget? It’s like being the chubby kid with fifteen dollars who walks into a bakery where all the cakes feature Transformers, Ninja Turtles, or Thundercats. Or maybe My Little Pony if that’s more your speed. There are so many options, and they’re all AWESOME! After much soul searching you decide on that glorious Optimus Prime cake, but the shop owner tells you that fifteen dollars won’t buy you a full cake with all the trimmings, so you have to decide what will get you the most cake, and that you have the right toppings for it. After all, what chubby kid doesn’t want the most cake they can get for their money?

Okay, so we decided on the Transformers cake. For the sake of argument, let’s say that our metaphorical cake is a preconstructed Commander deck at the store, and you decided on Daretti, Scap Savant. Daretti is probably the best deck out of the box for the 2014 crop of commanders. Why did I choose him when there’s a fresh batch of 2015 decks? Because we’re going simple! What better way to introduce myself and what I’m about than stripping down to basics and focusing there? So we’re going single color for now, and we’ll branch out later and grow together via blog posts. Plus, Daretti is one of my favorite decks out of the five I currently play. This deck out of the box can be very lethal, but it’s also a technical beast, and takes a bit of finesse to work when you’re dealing with a number of dead or useless cards. Daretti is an artifact focused commander, so why did they put so much red in the deck?

For every Wurmcoil Engine… There’s a Tuktuk the Explorer. Yeah sure, Tuktuk is fine if you only want to give your friends a good laugh, but if you want to make an impact, you’ve gotta dig deeper and replace him with cards on theme. Let’s keep our budget for any single card below five dollars, and I’m going to try to pick cards valued around a dollar or less if possible. First and foremost, one of the cards that can really make this deck sing is Blinkmoth Urn. This deck is built right out of the box to take advantage of artifacts, and what does Blinkmoth Urn do? Takes advantage of artifacts to give you additional mana per turn equal to the number of artifacts you control. The deck already runs plenty of mana rocks like Mind stone and Commander’s Sphere, so when you toss the Urn onto the field, you’ll be generating one additional colorless mana for each mana rock you have hanging out, not to mention the Urn itself as well as any other artifacts you might have. At a current price of $1.25, it’s a must have. It’s also a bonus bargaining chip for working with another player if they also have a number of artifacts. Or you can play the part of the Grinch, and throw down a card like Clock of Omens to to make sure your opponents don’t get a drop of that sweet sweet mana.

So what do you do with all that extra mana? We have quite a few options actually! The deck comes with a copy of Liquimetal Coating, which becomes hilarious and a little degenerate when paired with Shattering Pulse. Suddenly you’re tossing out Vindicate left and right at every permanent that moves because you’ve got all of that extra mana courtesy of Blinkmoth Urn. Maniacal laughing is optional of course, but highly recommended.

One more card I want to put a big focus on is Kuldotha Forgemaster. 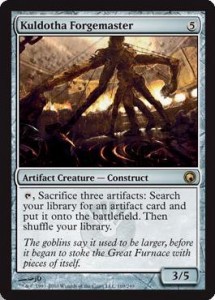 There are few things more important and useful in Commander than search effects. This burly Construct is well worth the three dollar purchase price to go and fetch any artifact from your deck and drop it right into play. As a bonus, since Daretti specializes in returning artifacts from your graveyard, you can just grab them back from your graveyard as you please, to be sacrificed again! Maybe you need that Caged Sun for the mana production. Perhaps you sprung for the Darksteel Forge and you’re preparing for the inevitable board wipe from the shifty eyed white player. Typically though, you’ll want to use the Forgemaster to grab your kill condition. Luckily you’ve already got the Wurmcoil Engine on hand, but he’s only a 6/6. Can we find better options?

The obvious pick is Blightsteel Colossus 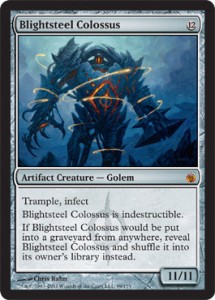 but considering he’s $25, he’s not available for within our budget. So what would make effective kill cards that we could add to the deck? First up…. 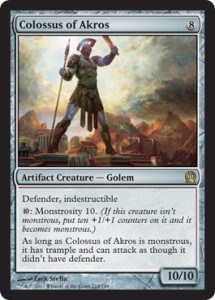 Colossus of Akros is a solid card, but unfortunately it can’t attack until you dump ten more mana into it. Considering how many artifacts you’re running, you should have no problem getting that much mana. In the meantime he’s a hell of a defender. Colossus of Sardia is another choice, though I’d only worry about that one if you REALLY need a body. Draco is a 9/9 flying body, but he’ll also cost you 8 per turn, so he’s unlikely to get the job done. Continuing the trend of paying mana to untap big fatties, Mage-Ring Responder is a solid rare out of Magic Origins. A 7/7 for 7 that nukes a creature when he attacks is nothing to sneeze at, and he only costs 7 mana to untap. That’s assuming you’re not using the aforementioned Clock of Omens, or a Voltaic Key. If you’ve got that Caged Sun out, that’s only 4 mountains, and you’ll have a floating mana left over. I personally prefer the Colossus of Akros over the rest of these cards. It’s hard for people to deal with a 20/20 indestructible trampler, and even if they do kill it, you’ll bring it back with your commander, or Goblin Welder, Scrap Mastery, or even Trash for Treasure, which is a great additional budget card since redundancy is a virtue in commander. Thanks to Daretti’s ability to constantly draw and discard cards (it may sound far fetched, but even Tibalt, the Fiend-Blooded is a solid fit for this deck), Scrap Mastery can often break games wide open for you.

The great thing about this deck is that it doesn’t need to be overhauled, it only needs gradual improvement. Reducing the amount of red cards (there really are too many that don’t give you a lot of benefit) and adding a few specific cards that I’ve outlined here does make a big difference. I hope you’ve enjoyed this article and gained a little insight into how making even small changes with a meager budget can make a big difference in a preconstructed deck. Do you have a Commander deck you need help with? I want to know about it! Whether you’re working within a budget or just need a direction to go in, drop a comment below with a link to your decklist, and I’ll consider it for a future article. Thanks for reading!