Let’s start the year by revisiting a fun, ragtag theme team. With great power, comes great responsibility…and potentially great profit. Luke Cage and Iron Fist set out out to make some cash with their powers through investigative and protection work. Thus, Heroes for Hire, Inc. was born! 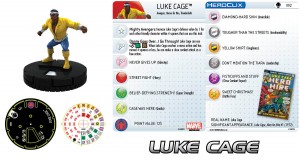 AOU002 Luke Cage – If you’re going to play Heroes for Hire, you should get your hands on one of its founders. Luke Cage was desperately in need of a remake and, thankfully, we got one this past summer. Luke Cage, the man with unbreakable skin, is exactly the beat stick you might expect. Some thick damage reducers bring longevity for a H4H team.

FI007 Iron Fist – This summer’s AOU gave us a new Iron Fist, but I think this piece from Fear Itself is still the best. The combination of Charge and Improved Movement make him highly mobile and his defense is great in close combat. Get him in close and put the fear of K’un Lun into your opponent. 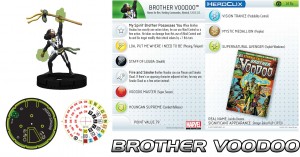 AMS017b Brother Voodoo – Voodoo gets work done. Period. He brings Probability Control to your team, which is always appreciated. If Voodoo is marked with exactly one action token, he can use Mind Control as a free action and takes no feedback damage from it. If you play it right, you’ll get a free Mind Control each turn.

DP023 Black Cat – Black Cat brings some useful support to your team. She brings the potent Defenders Team Ability to a keyword full of wild cards. Otherwise, she’s a straightforward piece. Keep her safe in Stealth and make use of that Probability Control. 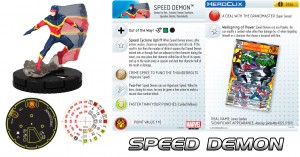 DP053a Speed Demon – Speed Demon is your typical Hypersonic Speed piece with a bonus. His Cyclone Uplift power gives you the potential of doing damage without an attack roll. Run around an opposing figure to make sure your D6 roll succeeds and Speed Demon will be the bane of your opponent.

The last important piece: the H4H Additional Team Ability. It’s not as powerful as it was when it first came out. Abuse involving ASM Ghost Rider and the NML Utility Belt led to WizKids reining it in. However, it’s still quite useful for 8 points.

So with that, here are some team ideas:

This is an attempt to get the classic founders together with a bit of support. It’s all close combat, so get in close. The H4H ATA should help you get a strike in if you need to cover a lot of distance first. This team has 6 points left, so I would suggest throwing on an ID card for a ranged combat or Telekinesis piece.

This team is really about Speed Demon. Devote Black Cat’s Probability Control into making sure he hits. Then use Shang-Chi and Punisher to soften up targets as needed. Both are solid close combat and ranged combat pieces respectively.

This team is fairly straight forward. Tie up your opponent with Misty Knight and Colleen Wing. Shoot at them with Punisher and Deadpool. Mind Control their best pieces with Brother Voodoo to cause some havoc. With 6 points left, I would throw on an ID card of your choice.

This entry was posted in Articles, Board Games, Decklists and tagged Clix, Hero, Hero Clix, HeroClix, Tom. Bookmark the permalink.