Civilized Scholar: Whispers of the Loser 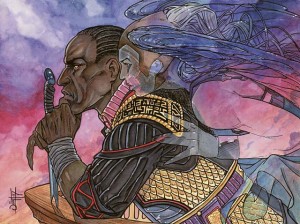 Well it’s back to bad records for me, it seems. At least for the time being. I went 0-3 tonight after swapping out 4 Lightning Strike, 2 Arbor Colossus and Crater’s Claws for 4 Whisperwood Elemental and 2 See the Unwritten and Dragonlord Atarka right before FNM began, a choice I still believe to be totally correct, in spite of my record, which is my worst since I picked up Magic again. This raises an interesting question, to wit: if I think the deck is the best it has ever been (which I do), then why did I do so much worse with it than the version which, on paper, was worse? Well, I’ll be the first to admit that I’m not a great Magic player — not even good yet, and I’m far from mastering the deck, even though I complained in my last article about it being a boring deck to play. These two factors probably play a more significant role in the games that I lose than I’d like to admit. Though it’s easy to complain about your opponent topdecking or being a lucksack, it’s also not productive. If you chalk up all of your losses to bad luck, then you are not, and will not improve as a player. And I don’t mean to pontificate — my knowledge of Magic doesn’t even come close to being comprehensive — I am saying this, as with everything else, as I am learning it. I extend all my advice with humble intent.

The learning process has been slow going so far. It sometimes seems as if I am making the same mistakes and losing for the same reasons over and over again. But every few games I learn something. As an example, take a decision I had to make in a casual game between rounds against Parker Hopkins. The relevant cards on board were a Whisperwood Elemental on Parker’s side and a Courser of Kruphix on my side. It’s my turn and I haven’t played a land and the top card of my library is a Temple of Abandon. I have three mana available and the relevant cards in my hand are a basic land and a Polukranos, World Eater. I was then required to make an interesting (to me) EV calculation: do I play the Temple, gain a life and scry, essentially drawing two cards, or play an untapped land and Polukranos in order to fend off an attack from the Whisperwood. We agreed to treat the game as if we were testing and I asked him for his opinion. We ended up agreeing that the Whisperwood was not such a significant threat as an attacker that it warranted the value that would be lost by playing the Temple. This may seem simple, but as someone who has played relatively few games with Coursers and Temples, it was an important learning moment. Evaluating threats correctly is very important no matter what  kind of deck you’re playing, except maybe combo, but even there it is necessary in order to go off at the right time.

Speaking of threats, let’s take a look at my matches…

Match Overview: Yeah. This one. Well game one began with us trading off turns, not doing much. I couldn’t put my opponent on any deck until the Retraction Helix came down, but by then it was too late. It began innocently enough with Temples of almost every flavor being thrown down by my opponent, who, little did I know, was scrying madly in search of his combo pieces. After he cast Elusive Spellfist, I was confused, but not scared. I had seen that card in limited. The same goes for the Pristine Skywise that came a few turns later. Astral Cornucopiaseemed strange too. On my side, I had been slowly working away at nothing so when my opponent cast the deciding Retraction Helix on Pristine Skywise, my heart sank a little as I realized the reasons behind my opponent’s ostensibly bizarre card choices. For those of you unaware of how this combo works, you cast Retraction Helix on Pristine Skywise, tap it to return Astral Cornucopia to your hand, cast Cornucopia for zero, Skywise and Spellfist trigger, untap Skywise, repeat ad infinitum and attack for lethal with an infinitely large, unblockable Spellfist. In general I think this combo is much more fragile than the standard Jeskai Ascendancy version (Example) because Spellfist can be killed easily. In fact, this was one matchup where I would have rather had Lightning Strikes than Whisperwoods. But alas, I didn’t and it was on to game two.

This time I came closer to winning as I curved out nicely with a Polukranos and a Whisperwood Elemental in play, however I died to a totally different combo — Briber’s Purse, Zephyr Scribe, Retraction Helix, Altar of the Brood. I got milled. Again, for those of you unaware of how the combo works, you cast Retraction Helix on a Zephyr Scribe with an Altar of the Brood and a zero mana artifact (in this case Briber’s Purse) out, tap Scribe to return the Purse to your hand, play it for zero, mill opponent for one, repeat. In both games I was not able to kill my opponent quick enough nor did I have any answers once he began to combo off.

As much of a bummer as it can be to lose to non-interactive decks, I still have to give props to my opponent, Sam Bubernak, for bringing a sweet rogue build to FNM and crushing a normal deck (played by me). 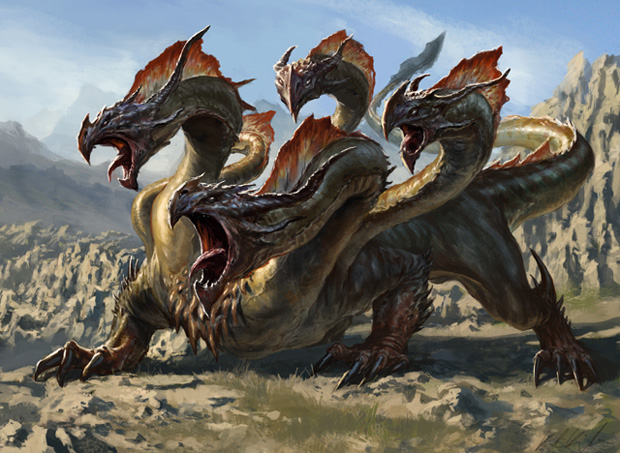 Match Overview: I won’t go into to much detail here about my opponent’s deck since I chose to do a deck tech on it, but let’s just say that it was grindy and counter-heavy. Both of my losses were to giant Mindswipes, which left me wishing I was playing the Dragononlord Dromoka version of my deck. This was my first experience playing this list against a pure control deck and as a result I think I made a lot of mistakes. Especially once I knew that my opponent was playing a large number of counterspells, I should have waited until he was tapped out to play my threats. As it was, basically all of my win conditions got countered. This was by far the longest of my three matches and by the end of game three, my mind was beginning to slip. So I limped on to round 3.

Match Overview: I envy the mental fortitude of the pros who play in tournaments that have six or seven rounds a day, because by the third round of most FNMs I honestly start fading pretty hard. Tonight was no different as round three, game two began and I stared half-witted into my hand, two Monster Energy Drinks coursing through my veins and not doing a damn thing as far as I could tell, besides making my nerves and viscera tremble and shake like a conspiracy theorist or a sidewalk prophet. This match has faded into a blur of red and green with the most outstanding detail I can remember being my opponent going Dragon Tempest into Descent of the Dragons with four creatures in play, killing me, literally, instantly. And I’m not sure if I really remember this or if I’ve convinced myself I remember this because of the note I made after it happened. Either way, I’m certain it occurred, and I apologize for not having any more information about the match. I’m sure Ian remembers it. He must have been thrilled to cast Descent. I would be.

The subject of this week’s deck tech is Michael Lusk, my round 2 opponent. Let’s take a look at this list before anything else.

4 Anger of the Gods 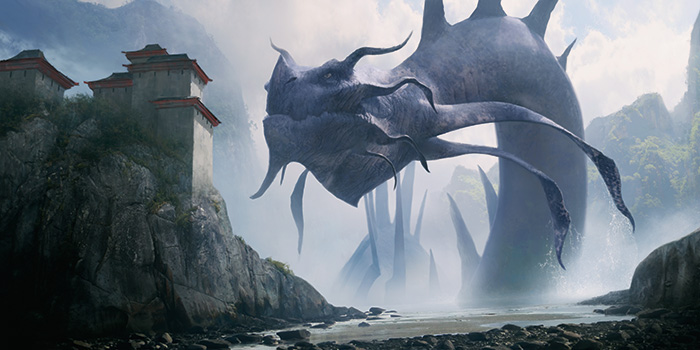 Alright. This one is really strapped in for the long game. I wrote down the list and conducted the interview while Michael played a casual game of Modern and while I kept half an eye on the draft taking place behind me. So this might be a bit scattered. Here’s my best attempt at reconstructing my notes. Thanks to Michael’s opponent Dan Krouse for assisting with the questions. Much appreciated.

Q: Why are you playing the deck?

A: It suits my playstyle. I enjoy long, drawn-out games.

Q: What cards in the deck are means to this end?

Q: How would you rank this deck, on a scale of one to ten-point-five?

Q: What is your deck’s worst matchup?

A: Any deck with Dragonlord Dromoka.

Q: And what does it win with the most often?

A: A huge Mindswipe or Ugin.

Q: How long have you been playing Magic?

A: Since Innistrad Block.

Q: What is your favorite counterspell?

A: Either Mindswipe of Mystic Genesis. (Authors Note: Dude loves him a spicy counterspell, no?)

Q: If you were a Magic: the Gathering card, what card would that be?

Q: OK. Now if you had to pick a creature?

A: To ruin other peoples’ fun.

As I move forward with making this a weekly series, I realize that some changes need to be made to the content and format of my articles. It won’t do to continue with the self-absorbed match reports and navel-gazing week after week. I think that would just be boring and selfish. I will still be writing about every FNM I attend, which will be as many as possible, however, I think it would be far more interesting to widen the scope of the thing. I intend for the structure and content of the articles to be fresh and compelling. To this end, I will be experimenting with different styles and perspectives, for example covering three feature matches instead of playing or bringing in a player I respect to analyze a particular game or match (after it’s over, of course). There will be more interviews, more deck techs and more collaboration which I hope will not only be instructive, interesting and useful but also highlight the community aspect of Magic.

This Will Destroy You – Black Dunes

Talk Talk – After the Flood