Binging on Batman: Arkham Knight has left me craving a return to Gotham City. So here’s a look at a Gotham star who got an absolutely amazing piece recently: Harley Quinn! 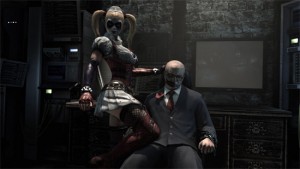 This Harley Quinn is the work of 2013 World Champion Jake Williams, who features on the sculpt as a hostage. He said this sculpt was inspired by the pictured scene from Batman: Arkham Asylum where Harley Quinn holds Gotham City Mayor Quincy Sharp hostage.

True to her origins, Harley is a great sidekick. Her “My Puddin'” trait lets her support one figure on your team while her Outwit and Poison harass your enemy. Stealth, Super Senses, and Combat Reflexes make her hard to hit so, despite her short dial length, Harley has some staying power. Still, I suggest treating her with some care.

At 65 points (full dial) or 50 points
(blue line), she is not hard to fit on a team. At 65 points, I would be a bit more aggressive with her Poison. At 50 points, I’d focus more on keeping her back so I can make the most use of her support powers.

So here are some 400 point theme team ideas for Harley Quinn:

Can I write an article about Harley Quinn without “Mistah J?” So let’s kick off with a Joker team. Keep the Joker Thugs adjacent to the Joker. Thug A will reduce the Mastermind damage that the Joker transfers to him by 1. Thug B will give Joker Toughness. Both of these should help Joker get the last laugh. Thematically, the Joker should really be Harley’s puddin’. But since Joker already has Probability Control and fairly high values, it might be a better call to make Mr. Freeze the puddin’. By getting a boost from Harley, he balances the threats on your team instead of focusing all your opponent’s attention on the Joker. Also, I threw in the Gamma Bomb since there were points left over and Joker’s all about blowing things up. Place the bomb so it includes your opponent’s starting area and make them come to you.

In DC’s Forever Evil crossover event, an alternate Justice League called the Crime Syndicate invaded Earth and took over. Owlman, the anti-Batman, took over Gotham’s organized crime. I would make Owlman Harley’s puddin’ and keep the Blackgate Inmate close so that Owlman can Mastermind damage to him. Owlman is especially nasty on those top clicks, so it’s worth throwing an inmate under the bus to keep him there. Deadshot offers you sniper cover with great values, the ability to Probability Control his own attacks, and Improved Targeting: Ignores Hindering.

Up next is Amanda Waller’s motley crew of “reformed” criminals. For this team, I would make either Killer Frost or Captain Boomerang the puddin’. Killer Frost is definitely the better attacker, so the choice largely depends on if you want more of a tentpole team or more of a balanced team. Either option would probably work, so it’s just a matter of your style. Mirror Master brings in great support and offers the Suicide Squad team ability for Harley and Boomerang to copy. Copperhead serves to tie up your enemy and deal close combat damage while Frost and Boomerang take shots at them.

That’s it for this look at Harley Quinn, but this is only a small taste of what you can do. She has A LOT of keywords and FL034 Amanda Waller can turn most DC villains into Suicide Squad members, so they sky is the limit there. If you’re like me, now’s a good time to put the controller down for a bit and try out some Harley combos.