Modern is currently one of my favorite formats and the main reason I love it so much is because I am infatuated with my deck choice. In all of the other constructed formats, I am often looking at different decks to play. In standard this is a more regular occurrence than in Legacy, but I have been known from time to time to send a blast out to see who has extra dual lands.

Before I get into my beloved deck choice I want to make a plug for why you should play Modern if you aren’t already.

Money – Everyone’s first and usually biggest gripe is the cost of a deck and frankly this is unfounded. Yes the up front cost is higher. But, since Modern is an eternal format 99% of the time your cards will retain their value. Making the investment for fetchlands and Dark Confidants can be tough but they are also Legacy playable (and anyone who considers themselves a serious MTG player should be trying to play Legacy). If you price out what it takes to stay up to date with standard for a few sets, you’ve just bought a Modern deck. Lastly, there are numerous, competitive, well positioned decks that don’t require expensive mana bases or Tarmogoyfs.

Diversity – It isn’t just a ship that sailed across the Atlantic. Modern is extremely diverse and there are plenty of viable strategies. Aggro, Burn, Combo, Control, Midrange, Reanimator…all viable. This gives you the freedom to truly play your style of deck.

Player Base – The End Games Modern scene is steadily growing and it is really exciting to see more and more new Modern players playing all sorts of different decks. I think people are beginning to realize that the the benefits/fun of playing the format far outweigh the barriers to getting into it. So don’t be afraid that you’ll make the jump and find no one to play with.

TLDR – Play Modern. If you don’t know where to start ask the guys at The End, they’ll hook you up.

You’ll find my decklist below. I’m going to talk about the strengths and weaknesses of the deck, why I love it, and then talk about my win with it at the Modern tournament where top prize was a From the Vaults: Twenty box.

This deck is tunable to suit a variety of control styles. It can pack tons of counter spells, have more or less creatures, and even change color combinations. Regardless of what version you are playing, they all start with Gifts Ungiven. 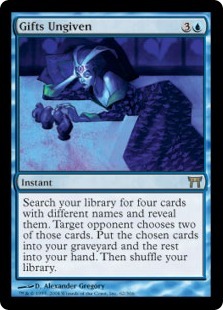 This card is insanely powerful and that’s probably why it is banned in Legacy and restricted in Vintage. On face value the card looks like you can grab a whole bunch of whatever type of answer you need to control the board and get two of them in your hand. While this is certainly true and common, where it gets more interesting, fun, and certainly better is when you read the oracle text for the card

Oracle Text: Search your library for up to four cards with different names and reveal them. Target opponent chooses two of those cards. Put the chosen cards into your graveyard and the rest into your hand. Then shuffle your library.

The oracle text takes into account the interaction of Gifts Ungiven’s stipulation that cards have “different names” and the fact that library information is confidential to your opponen aka a hidden zone. In other words, you can technically fail to find a different named card and only be able to find three, or two, or one card and when the opportunity to fail to find is present you can choose to do so,, ergo “Search your library for up to four cards with different names”

Because of this we can cast Gifts to “cheat” certain cards into our graveyard. We can pick something like Unburial Rites and Elesh Norn for our opponent to conveniently put in the graveyard for us 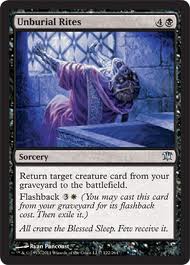 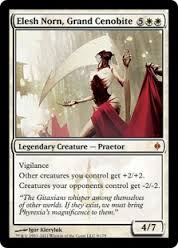 Or perhaps against control/combo something like Life from the Loam and Raven’s Crime or maybe against Tron you can grab Life from the Loam and Ghost Quarter to kill lands over and over. This engine working with some potent cards that interact well with graveyards and generally good control cards make this a very capable deck. 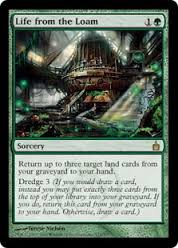 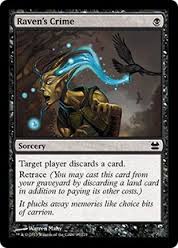 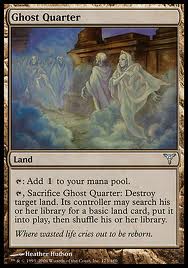 Overall the biggest strength of the deck is the supreme amount of flexibility. The deck can be tuned to meet the metagame and with several potent answers to a large variety of decks already in the Mainboard you can fair very well against a diverse format. The deck is also reasonably fast. A mana accelerator and a Gifts Ungiven can easily mean a turn 4 win. The deck is also fairly resilient. Often times you can attrition out opponents using things like Lingering Souls and Creeping Tar Pit in combination with Life from the Loam.

The sideboard is also much more impactful. You can diversify more since Gifts finds the answers you need. This again allows you to adjust for a broader format. For example, against Tron I add the Terastodon to kill their lands. This can also be good against land light Combo decks.

The mana base is greedy, very greedy. You play four colors which necessitates lots of fetch lands and shock lands to try and ensure you don’t get color screwed (which can definitely happen). This means it isn’t uncommon to have done 6 damage to yourself by turn 2. 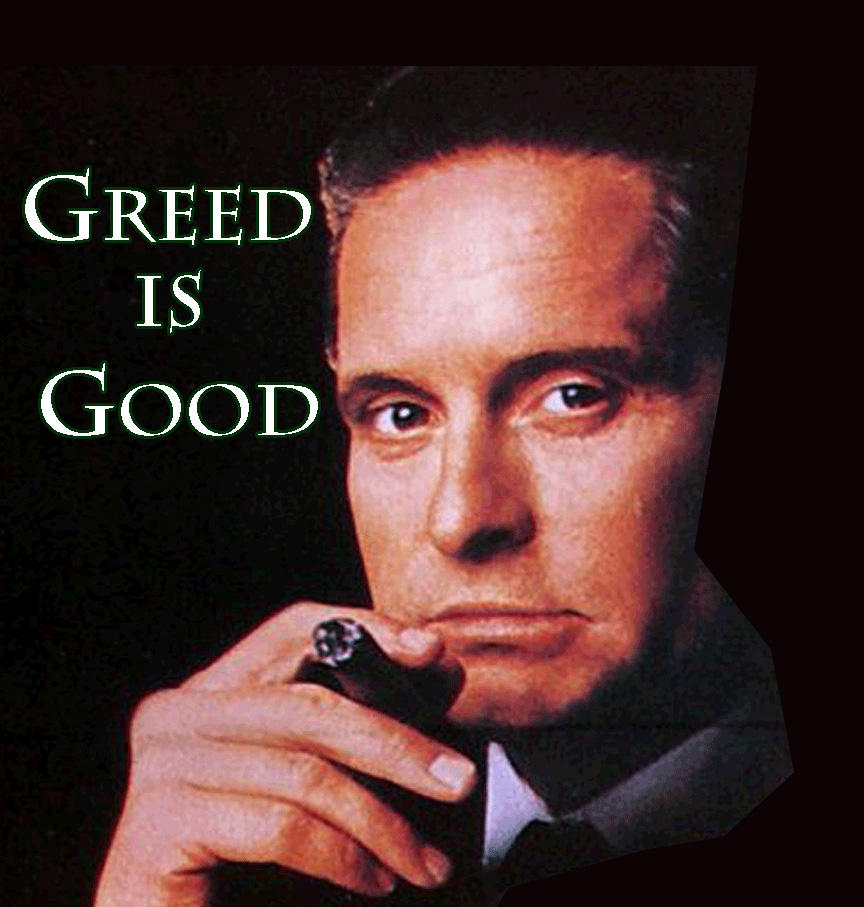 Also graveyard hate slows down the deck a lot. It far from completely wrecks you but you have to take a much more defensive posture when facing it.The deck can also be very complicated to pilot. The decision trees can be very broad. Sometimes it is a no brainer but more often than not it is tricky. Knowing what lands to fetch for is often the most difficult choice in the game and if you choose wrong it can cost you…math is your friend. There can also be some tricky choices with what to Gifts Ungiven for. If you’re playing against Jund they will probably have removal for Elesh Norn or Sun Titan so do you go for it anyway? or do you keep answering threats?

My Version (Differences with other Gifts Decks)

I wanted to be more proactive with the deck. So instead of trying to play a “draw go” game with lots of counterspells I opted to go for more hand disruption (this also helps get rid of graveyard hate early). This way I could get information as to what my opponent had and deal with troublesome threats so that I could tap out for my sorcery spells later on with no fear that I would miss a critical counter.

I also added Bird of Paradise. being able to play Liliana on Turn 2 or Gifts on Turn 3 can be oppressive for your opponent. I wanted to be able to ramp out these cards. Sometimes I found myself with a Deathrite Shaman but no fetchland so I couldn’t take advantage of his mana ability. To hedge against this and opposing Deathrites I opted for 3 Shamans and 2 Birds. This gave me five mana dorks and a decent mix.

Sun Titan is also not as common. The decks where Elesh Norn isn’t as good Sun Titan fills a good role. He can bring back a Kitchen Finks to gain me critical life or grab a Liliana which beats everything that isn’t aggro. It also can be cute to get back things like Nihil Spellbomb against Storm or SpellSkite against Burn. Plus I generally love Sun Titan.

I played against Affinity 3 times total and 3 times against combo. Rather than go game by game I’ll talk about the matchups more broadly.

Affinity – This is a straightforward match. Use hand disruption to get rid of Cranial Plating and kill all the creatures. If you can Gifts Ungiven for Unburial Rites and Elesh Norn you win. Even if they have the Patch to Exile, the damage Elesh Norn does can usually put them far enough behind. You have to manage your use of instant speed removal because their infect lands can be troublesome. Lingering Souls also shines here.

Sideboarding is straightforward. Take out Thoughtseize, Liliana, and Raven’s Crime/Life from the Loam and bring in more removal, Timely Reinforcements, the specific Affinity hate (Stony Silence, etc). A resolved Stony Silence is backbreaking for them and Darkblast is fantastic because it kills practically their whole deck.

Combo – Against these decks you take the opposite role. Gifts package is usually for Life from the Loam and Ravens Crime to pressure their hand and decrease the chances of comboing. Liliana is also amazing because they usually have a hard time dealing with her. Diligently strip their hand and try to sneak in threats like Lingering Souls and Kitchen Finks to close out the game.

Sideboard – Take out the appropriate removal which can be matchup dependent and add some counter spells and more hand disruption. Against Storm I also sometimes bring in Terastodon to kill their lands and Pyromancer’s Ascensions.

Win a From the Vaults: Twenty (Hooray foil Jace, the Mindsculptor)

I had a lot fun at the Modern tournament. It really is an awesome format that breeds a lot fun magic. Shout outs to The End Games for putting on a great Tournament and for supporting a great format. If you want more information on Modern check out Joe Soto’s blog post on different Modern decks and their associated dollar cost or just hit up the guys at the The End Games.

This entry was posted in Articles, Decklists, Event, Magic The Gathering and tagged Decklist, From the Vault: Twenty, John Henry, Modern, MTG, TEG, The End Games. Bookmark the permalink.