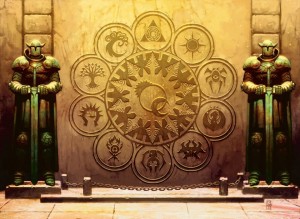 Hey guys, I’ve watched and participated in a few more full block drafts, and I’m here to discuss general pick strategies and things to keep in mind when drafting specific guilds. In my last article, I mentioned that drafting two colors is the best strategy, and I’m still a big proponent for this approach.

One argument for drafting a three color deck is that you’ll have more powerful playables. Keep in mind, though, that when you’re drafting a three color strategy, you will have to “waste” picks on fixing early. You end up missing out on a lot of strong playables if you’re conservative but you’ll lose a lot of consistency if you’re greedy and don’t take fixing early. The only reason you should ever end up with a full three color deck (as opposed to two base colors with a light splash) is if you didn’t read or send signals properly and got cut off in your guild’s pack (also known as the trainwreck draft). This will eventually happen to all of us, but we can try to draft well so that we don’t have to rely so much on luck.

As long as you are able to read and send proper signals, you should be able to get enough playables to put together a solid deck. The consistency you gain from staying two colors is well worth the potential lack in power level of individual cards. A good way to start experiencing the power of a two color deck is to just pick a guild based on your first pick and stick with it. Sometimes you will get very lucky and the players passing to you will not be in the guild you chose. Other times you won’t be so fortunate and the players next to you will be upset with you for ignoring their signals. That’s where the real skill of drafting comes in: paying attention to the signals you send and receive to choose the colors that you’re most likely to succeed with.

The DGM pack is the most important pack for you to be focused on with your signals since it’s the first pack. When you’re picking cards from the later GTC and RTR packs, you can simply shift to autopilot: choosing the strongest card in your colors and completely ignoring all other cards. Reading and sending signals in RTR block draft can be broken up into two different approaches depending on which guild you draft.

When drafting an RTR guild, you don’t need to pay as much attention to the signals you send. If you and the person to your left are both in Azorius, your deck will likely be much better than his, since you see all of the Azorius cards from the RTR and DGM packs before him. Unfortunately, you won’t get very many good blue and white cards from the GTC guild, but sometimes having two packs of strong picks is all that you’ll need.

What you don’t want is to be that person on the left in this situation. Thus, it’s much more crucial to read signals and switch guilds if you think you’re going to be fighting the person next to you.

If you’re drafting a GTC guild, it’s much more important to keep note of which cards you’re passing to ensure that your guild is open in pack 2. For example, if you pass the player to your left some powerful Boros cards, you shouldn’t expect to get very many good Boros cards in pack two. When you’re trying to stay open in the first few picks, try to keep track of which multi-color guild cards you have been passing. You’ll want to avoid those guilds if you can.

After my first pick, I will choose the best card in each pack, keeping note of the other cards I’m passing are and giving on-color cards a boost. I generally like to decide which guild I will be drafting by pick 4 or 5. After that point, switching guilds will cause you to lose too many playable cards. Sometimes, you might get unlucky and the packs are very stacked toward a certain guild, so you might end up fighting your neighbors for playables. But you can’t expect to win every draft. What’s important is to make sure you put a lot of thought into the first few picks, pay attention to what kind of signals you’re sending and receiving, and you’ll have the best chance at success.

If I get passed one of these multicolored cards in the first few picks, I will strongly consider going into the respective guild. These are the also cards you should take note of when passing your packs. 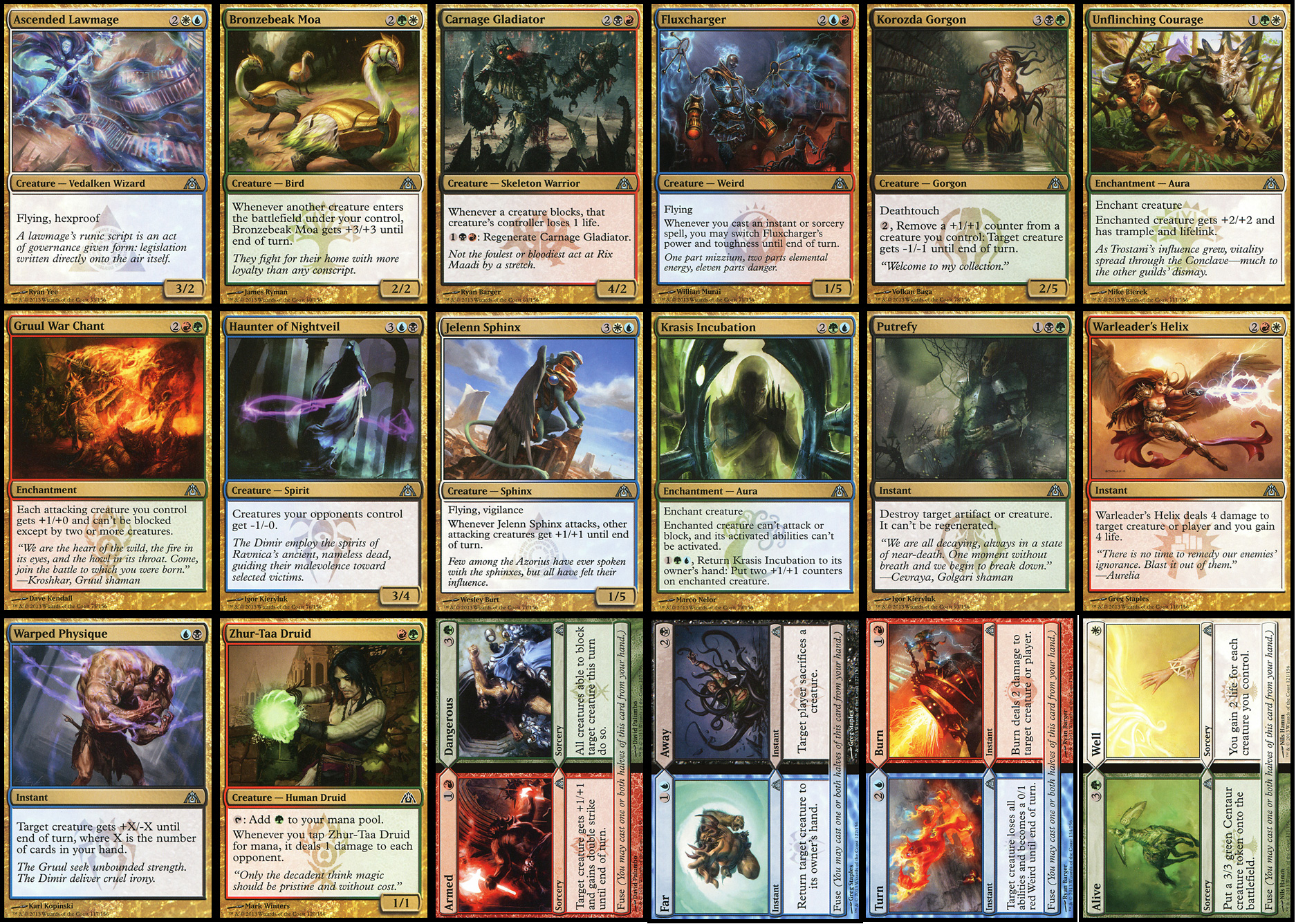 To end this article, here are two decks I won with recently in 8-4’s on MTGO.

My first cards in my first pack included Boros Battleshaper, Armed and Dangerous, Gruul War Chant, and Viashino Firstblade. I took the Boros Battleshaper since that card ends games by itself. I was hoping my next two neighbors would take the Gruul War Chant and Armed and Dangerous, fighting over Gruul. I continued down Boros with a Viashino Firstblade second pick. In my third pack, there were no Boros cards, so I picked up a Zhur-Taa Druid, the best card in the pack. The green ended up flowing while the white starting drying up. I kept taking green, white, and red cards for the next few picks, until my Armed and Dangerous from pack one wheeled. Here’s how the rest of the deck turned out: 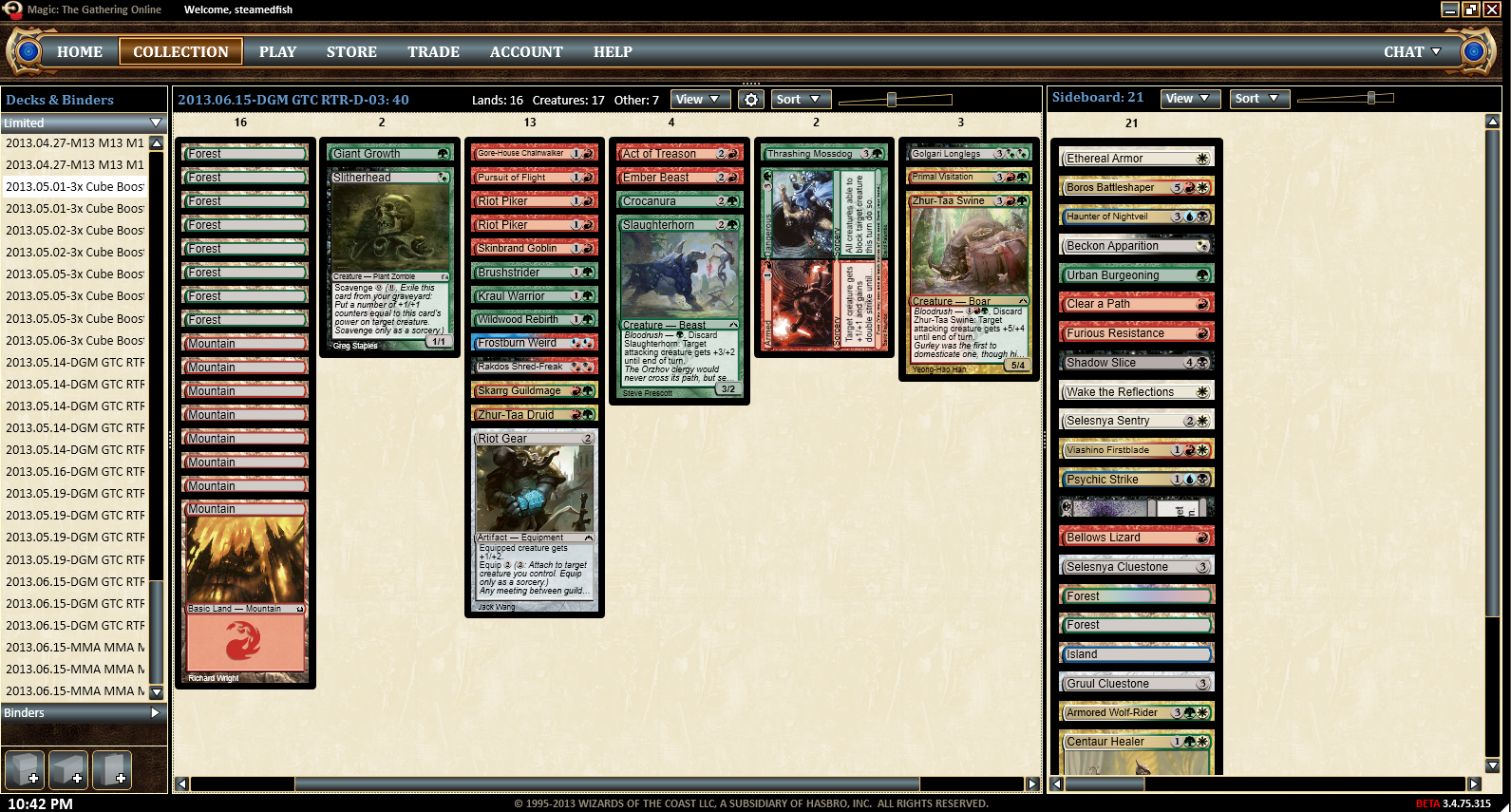 I didn’t have many playables, so I was forced to play cards like Slitherhead and Riot Gear. All of my matches were very close, going to game three in each. I also ended up winning every game I cast Armed and Dangerous.

If you’ve ever drafted with me, you’ll know how much I love Dimir. I end up making questionable picks just because I favor cards like Woodlot Crawler more than I should (my pack one pick one here). A third pick Haunter of Nightveil put me on autopilot for the rest of the draft. I was very lucky, opening Pack Rat and getting passed Desecration Demon (which I took over a stab wound). Two Call of the Nightwings also helped lead me to an easy 3-0 victory. 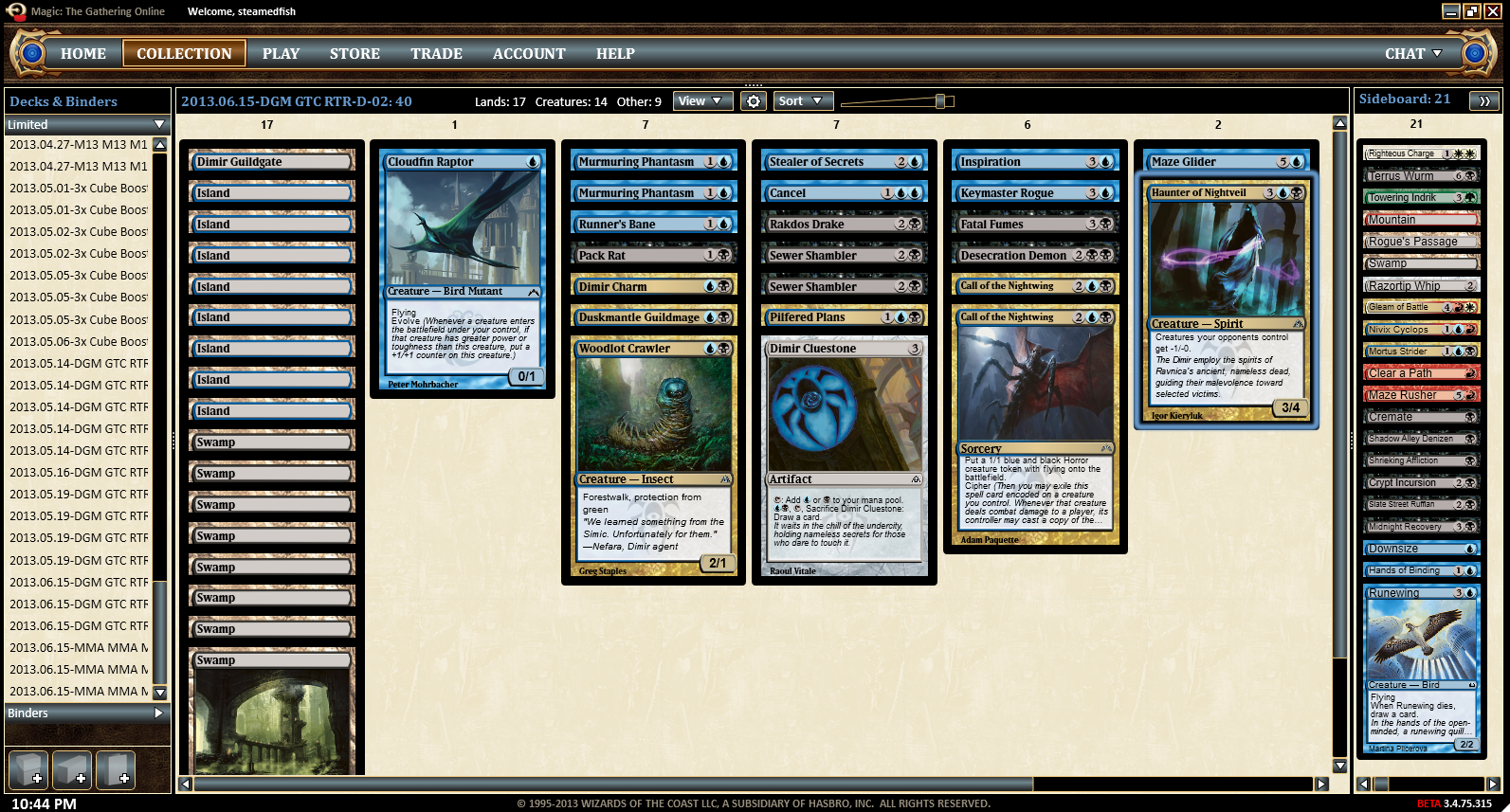 I’ve done a few Modern Master’s drafts, both online and in paper, in the past two weeks. It’s a really fun format and there are a lot of mechanics that make it more interesting and skill-intensive than a normal draft. Leave a comment if you would be interested in reading an article covering the format.

Thanks for reading and good luck in our last month of RTR block draft!

EDD is a 31 year old Magic fan and part time blogger at The End Games.
View all posts by EDD →
This entry was posted in Articles, Magic The Gathering and tagged Block Draft, DM, Draft, GTC, Lenny, Lenny Li, Magic The Gathering, RTR. Bookmark the permalink.