Hey everyone! Now that I’ve gotten some time in playing more Magic with the Koreans out here, I wanted to write a bit about what it’s like to be playing the game on the other side of the world in another language. So, I’m going to do this article in four sections – playing with a language barrier, tournaments and events, meta game, and then the rundown on why G/B Azor’s is (I think) the best deck to play here in Korea for Standard. 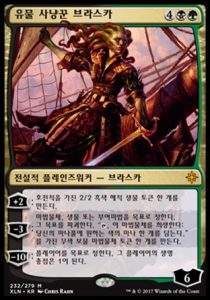 Playing with a Language Barrier

So, the most intimidating part of wanting to play MTG here in Korea was the fact that I obviously am not yet fluent in Korean. What if I need a judge? What if I have to name a card? But, it turns out, this isn’t as big of a deal as what I originally thought it would be. Most of the Koreans know a lot of the basic English vocabulary for the game – “untap, main draw, land, cast” is usually how the turn starts for them when they have a land and spell to play. When they have a response or are thinking about a response, they usually just say, “stack.” The know “counter,” “kill,” and usually “exile.” They know English numbers within reason (Koreans often confuse pronunciation for the teens and tens) for life totals. They can often read a simpler card that’s in English and figure out what it does, something like Moment of Craving but definitely not anything with more text than that.

There are, however, a lot of things that are harder to communicate – how a card works for example. There is a lot of card reading here. As I’ll talk about later, there end up being a lot of cards I play here that they don’t know. Since I took off basically all of Ixalan playing when I first moved here, there are some cards I don’t know off the top of my head still. Thankfully, the judges and staff are bilingual. They’re more likely to just tell you what the card does if you ask rather than pull out their phone to show you Oracle. So far, that hasn’t been any sort of issue.

The most important thing for playing with a language barrier is focus even more on nonverbal language and to constantly double check that you’re on the same page as your opponent. These are things that are always important if you’re playing Magic in a tournament. From a judge’s perspective, a large portion of errors in tournaments happen because of insufficient communication.

When life totals change, make sure you both have the same number written if they miss the life gain on a card like Battle at the Bridge. Always point toward your target when you’re casting a spell. Gesture to your opponent when you’re passing the turn. Give a thumbs-up when you’re acknowledging something resolving. Hold your hand up when you ask them to wait. Things like this help your communication when you speak the same language, but they’re crucial when you have a language barrier.

Korean stores schedule events every day of the week. There are a small handful of stores in Seoul, and they will typically schedule at least one event every single day. Sometimes these events during the week don’t fire, but on the weekends you’ll usually find somewhere around 16 for these. Standard and Limited are the most popular formats, with Modern being the next. There are a significant number of Legacy players, but they’re mostly foreigners.

Prize structure is pretty normal. First place gets a number of packs or store credit equivalent to that many packs. So, 3rd place for a small tournament might get you 4 packs, or 16,000 won in store credit. 4,000 won is worth about $3.75, so technically packs here are a little cheaper. In addition to these prizes, these stores do a Lucky Prize for their events. They have each player roll three dice, and the highest wins. One store gives a bonus to your roll for notifying them you’ll be in attendance before the event. These lucky prizes are cards that are relevant to the format. For example, last weekend the lucky prize for Saturday modern I went to was a pre-release stamp Tasigur, the Golden Fang.

Playing outside of events is significantly less common. Koreans tend to show up places with their friends to do stuff then part ways. But, they’re quite friendly and welcoming to me. I try my best to speak in Korean, granted sometimes it’s terrible. I need to ask how to say, “do you want to play?”

So, what is the metagame like here? In general, Koreans like playing control decks, or grindy decks. Obviously, there are more decks present, but those archetypes are a bit over represented. Almost everything you play against is going to be a popular, known quantity.

In standard, the most common decks right now seem to be any UB/x deck. There’s no Approach going on, but there’s a lot of countering and killing until The Scarab God.  Mardu vehicles is the more common aggressive deck, but there are some people playing mono-red. I’ve seen one person on Jim Davis’s UW Auras deck. The only brews I’ve seen so far have been a U/B pirate control deck that is basically just some pirates, kill spells, and counter spells to protect the pirates and a R/B cycling deck that was basically just the R/B control decks with Vile Manifestation and The Scorpion God where things like Glorybringer and Rekindling Phoenix should be.

In modern, there is a ton of control in the forms of Mardu Pyromancer, Grixis, and UW. There’s also a lot of GB or Jund so far. The only interesting brew I’ve seen so far playing modern here was another foreigner with a deck utilizing the standard mono-red prison shell with Blood Moon, Ensnaring Bridge, and the other artifact hate-cards, backed up by Life from the Loam and either Molten Votex or Seismic Assault. It plays like a prison deck but also a dredge deck. It was super sweet. This week is the Lunar New Year, and one of the stores ran an unsanctioned modern tournament yesterday with Jace and “BB Elf” (as Koreans call it) legal. Everyone showed up doing the expected things – jamming the elf into their Jund decks and throwing Jace into their control decks. I played a 4-color value town deck playing both of them and the Saheeli combo. One guy showed up playing Burn and marched through the slow decks to first place.

Koreans pay attention to the top 8’s of Opens and GPs, plus the MTGO results like we do. However, since there are virtually no pros writing articles in Korean, they’re pretty in the dark about anything you can’t find on the front page of MTG Goldfish. They’re not going to know the sweet tech cards or decks you’ll find in the columns of ChannelFireball or SCG. Playing Nezahal, Primal Tide in a control mirror leads to lots of confusion and reading. Subsequently, it leads to lots of accidentally being given cards by your opponent who still is trying to figure out how the card works three turns later, despite the card being written in Korean. Given that there have been almost no major standard events so far, it’s easy to pull a fast one on them. Which brings us to my last point…

This deck is the best thing you can do here, because no one knows about it. The deck is also fantastic against the kinds of things they like to do here. If you don’t know, this is a deck that’s been gaining popularity on MTGO, and EFro wrote an article about it last week. The deck is sweet. Early game, you use spot removal to not get overrun and balance it with disruption. In the mid game, you balance continuing to answer their threats with increasing your mana. The namesake card, Azor’s Gateway is great once you manage to land it. Sometimes you play it on turn two, and it feels like you can’t lose. Sometimes, you have to wait until turn 5, and then it helps you see an extra card per turn. If you manage to flip it, it’s lights out. Even if you don’t manage, the playset of Hour of Promise gets you to the point where you can cast a lot of spells in the same turn.

I played two small events today. One was a round robin with GB Constrictor, Mardu Vehicles, and Sultai Midrange. The other was a 6-person event where I played against Mono Red, a unique Esper Control, and UW Auras. I clean sweeped the round robin event, only dropping a single game to the Sultai deck. Mono Red was fairly easy. UW Auras is a horrible matchup for this deck, especially post-board when they’re playing Spell Pierce and Negate to all of your early removal. The Esper Deck is a pet brew of LS (of League of Legends fame). Getting your biggest spell hit by a top-decked Spell Swindle is a hell of a momentum steal.

The constrictor match is easy to fall behind, but the deck is slow enough at deploying its threats that there’s enough time to find answers. I ended up staring down double Winding Constrictor, a Jadelight Ranger, a Verdurous Gearhulk, and then he cast a lWalking Ballista with 9 counters. Zombie tokens from Hour of Promise are fantastic chump blockers to buy time in this kind of crappy situation. I was able to flip the gateway on the next turn, Mastermind’s Acquisition for the Wildest Dreams, pick up 6 cards from the yard, search again for Bontu’s Last Reckoning and wipe the board all in one turn. From there it wasn’t too bad.

The Vehicles and Red matchups are just making sure that you find enough removal and get to peak at their hand to try to remove the problem cards. Playing a ton of removal spells with life gain attached makes the task not overly difficult. However, UW Auras is just hell to play against. They always have an abundance of tokens to protect their big creatures from Doomfall, and after boarding they’re just always going to have a counter spell of some kind. The Sultai Midrange deck took me all the way to one of us decking out (him, with me having no cards in library to draw on my own next turn) in our game two. In game three, I took the line of naming Vraska’s Contempt with Lost Legacy to make sure Vraska, Relic Seeker would stick. The game was over on turn 10.

This entry was posted in Articles, Magic The Gathering and tagged Korea, Magic, MTG, teglife, Tournament. Bookmark the permalink.