Ticket to Ride: Alvin and Dexter – Board Game Review

Is standard Ticket to Ride not chaotic enough for you? Does it lack the fire and destruction you’re looking for? Well, Alvin and Dexter are waiting for you. This is a small expansion for Ticket to Ride that adds great flavor to the game. 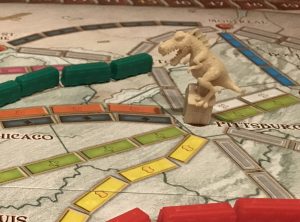 Alvin is a space alien and Dexter is a dinosaur, each represented by a small plastic piece. At the beginning of the game, the last two players put Alvin and Dexter on two cities of their choice. As long as these monsters are terrorizing that city, players cannot claim routes in or out of that city. Tickets (e.g. New York to Los Angeles) are worth half of their value if a monster is on that route at the end of the game. 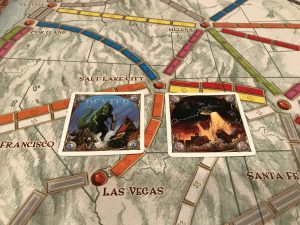 But Alvin and Dexter aren’t fixed. In addition to their regular turn, players can spend one wild card to move one monster up to three cities or two wild cards to move them up to six. If they do, the put the corresponding monster card in front of them face up. As long as that monster card is face up, it cannot be moved again. At the end of that player’s next turn, they turn the card upside down, add it to their pile, and the monster is up for grabs again. At the end of the game, players are rewarded fifteen points for having the most Alvin or Dexter cards. 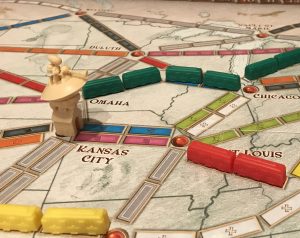 This is a fantastic expansion for Ticket to Ride. Every time I’ve brought it up to other players, I’ve gotten raised eyebrows. Monsters? Really? But after the game it’s always been a big hit. If you’re looking for a way to add some pop to your game, this is a great option.