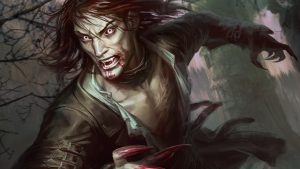 Pro Tour Gatecrash was the first standard event I ever sat down and watched. There were lots of cool deck to get into: Ramp decks abusing Kessig Wolf Run, Control decks who’s main win condition was Nephalia Drownyard, and many different ways of players burning their own Boros Reckoner to kill opponents out of no where. Tom Martell made the Top 8 with a deck that I quickly fell in love with. It revolved around sacrificing creatures to Falkenrath Aristocrat and Cartel Aristocrat to dodge removal while empowering his beat-down plan. He called it the Aristocrats.

The deck was good. There were a high amount of decisions and ways to maneuver around the opponents game-plan for a 32 creature deck.  The deck was also really cool and fun to watch. I could gush for hours about how much I love the deck. Indestructible vampires, 5/5 demon tokens, and so many other flavorful interactions!  In short sacrificing creatures to vampires excites me more than it should.

Moving into Aether Revolt we will have some decent sacrifice outlets back in Standard. 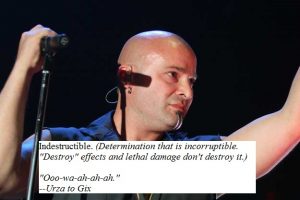 Yahenni, Undying Partisan is ready for some death and destruction (and indestruction! That’s a thing right? Someone give David Draiman a call to confirm) on both sides of the board, as all good vampires are. Let’s take a look at our options for an Vampiric Aristocrats style deck in the new Standard.

In the one drop slot we have one good option and three mediocre options. Falkenrath Gorger is a two power one drop with a relevant ability; everything an aggro deck could want.  Indulgent Aristocrat is a vampire, and an additional sacrifice outlet which can be even better than Yahenni if we get to flood the board. But it’s certainly not a creature we are excited to play on turn one.  Insolent Neonate is slightly better on turn one with pseudo-evasion. Being able to sacrifice itself for a rummage is synergystic in a few ways. The more madness cards the deck runs, the better that ability becomes. However, if we want to be able to play cards like Stromkirk Condemned or Gifted Aetherborn on turn two, we’ll have to avoid putting too many red one drops in the deck. This is why  Vampire Cutthroat is worth considering. It’s the weakest option for sure, but sometimes consistency is more important than raw power.

The two drop slot is full of good options. The auto-includes should be Scrapheap Scrounger,  Stromkirk Condemned, and Zulaport Cutthroat. Scrounger beats face and is resilient.  Stromkirk Condemned pumps enough creatures to be worth playing even if it’s not something that can come out turn two. Zulaport Cutthroat doesn’t attack well, but it applies pressure and gives the deck late game reach.

The three drop slots are legen, wait for it, … 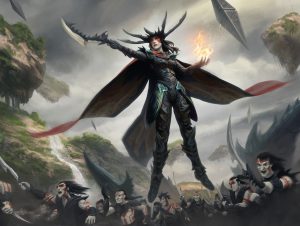 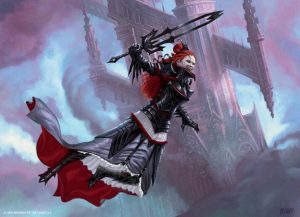 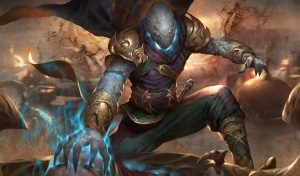 … dary. Olivia, Mobilized for War is a three power flier that can turn our Scrapheap Scrounger and Zulaport Cutthroat into vampires. Drana, Liberator of Malakir pressures opponents to deal with her immediately. One hit gets her out of Yahenni’s Expertise range. And keep in mind she has first strike. So the other creatures get +1/+1 counters before they deal damage! Yahenni, Undying Partisan  is our only three drop without flying. The flightless partisan does have haste, a free sacrifice outlet that makes him very resilient, and an ability that makes opponents have to be very mindful of how they block. So we’ll let him in the club.

The only four drop we run is Bloodhall Priest. Kalitas, Traitor of Ghet might be a decent sideboard option against decks that also fill the board with creatures. He is more of a mid-range card though, and too slow to include in a deck that wants to end the game as soon as possible.

A few non-creature spells should round things out nicely. The deck will want some Fiery Tempers for removal and reach. A Lightning Axe or an Unlicensed Disintegration may be good to have to get rid of something nasty like an Ishkanah, Grafwidow. Call the Bloodline is interesting, but it seems slower than we want. Put it in the sideboard to combat opponents with wraths.

B/R vampires has been a fringe playable aggro deck since Shadows over Innistrad. Aether 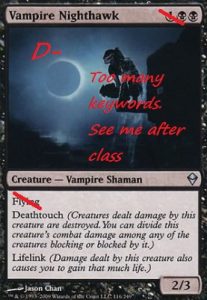 Revolt brings Yahenni, and Gifted Aetherborn (AKA Flightless Nighthawk) into the coven. This should fill out the curve well enough to have a strong aggro deck. With the support of Zulaport Cutthroat Yahenni and Indulgent Aristocrat look much stronger and can give the deck wyas to finish the game much faster. And with all the sacrificing going on, Ormendahl, Profane Prince will certainly want in on the action. I’m not sure if the Vampire deck’s mana requirements will allow for a colorless land, but as the old adage goes: You miss 100% of the demons you don’t summon.