One of the best things about Batman is his villains and this month’s Joker’s Wild gives us a set chock full of them. This set is full of low-cost pieces that offer lots of great team building possibilities. On top of Arkham Asylum, this set has Suicide Squad, Outsiders, and JSA subthemes.

After sitting down and playing some sealed games, here are some Commons, Uncommons, and Rares that really stood out.

JW009 Robin – This Robin is fantastic tie-up! He starts with Plasticity, 17 defense, and Combat Reflexes. But his “Zip Line” trait is what makes him so exceptional. Once per turn, if Robin has no action tokens he can take a power action to be placed in a square within range and line of fire. If he has one action token, it’s a free action instead. Robin has no trouble getting where he needs to go and tying up your opponent – all for 45 points!

JW016 Batman – After Trinity War, I thought I’d never need another Batman. While that’s still my Justice League go-to, this new Batman is a great choice for Batman Family and Outsiders teams. Batman has the Outsiders TA in addition to the Batman Ally TA. His trait lets a friendly character who has used the Outsiders TA (including himself) use Outwit. His attack power is a great Swiss Army knife which represents his utility belt well. There’s very little not to love about this Batman.

JW021 Ra’s Al-Ghul – I’ve been waiting for a new Ra’s for a long time and this one doesn’t disappoint. He’s a bit pricey at 140 points, but he brings so much to the team. He is great at dealing damage. He has Outwit and shuts down opposing characters’ Batman Ally TA. His trait brings in a Lazarus Pit special terrain marker which lets you heal him or another piece on your team. In one the sealed games I played, Ra’s almost took down my team single-handedly.

JW030 Two-Face – Two-Face is a hard character to represent well and I’m not sure Heroclix has ever really gotten it just right until now. Two-Face has to parts to his dial: order and chaos. The order side offers solid support; the chaos side does the damage. Once per turn, you can give Two-Face a free action to heal him one click. If you do, roll a dice and on a 4-6 he switches dials. This piece captures Harvey’s fractured personality in a way that is finally playable.

JW038 Talon – Finally the Court of Owls makes it to Heroclix! Talon is a presence on the map. He has great maneuverability. His Regeneration can give him great durability. If you have Court of Owl Initiates, he gets even more playable since he can use Mastermind on them. I’m really looking forward to fielding a Court of Owls team soon.

JW046 Grace – Grace is a member of Nightwing’s later incarnation of the Outsiders and this is her first appearance in Heroclix. She’s a powerful attacker. Her Outsiders TA is really helpful at shutting down Combat Reflexes. Her trait lets her take a move action and attack as a free action if she’s targeting the highest point piece. As long you send her after the big guns, it’s very hard to get outside of her threat range. 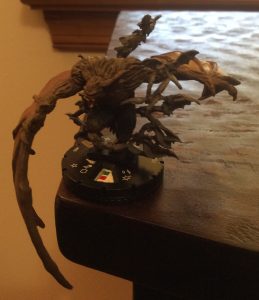 I’m still delving into this set, but I’m really enjoying it so far. I’m looking forward to fielding all nine of the JSA members on a 300-point team (Yes, you read that right). There are a handful of high point pieces, but most of this set is on the low end. If you like large teams, you’ll really appreciate this set. If you don’t, this set might not be for you.

As a sidenote, the SR Man-Bat has to be the most gorgeous sculpt I’ve seen in Heroclix to date. This photo doesn’t come close to doing it justice.