Hank McCoy, the Beast, is one of my favorite X-Men. I grew up watching the animated series and Beast featured prominently. I have always liked his mix between a sharp mind and an acrobatic fighter. So when this year’s Uncanny X-Men gave me a new Beast, I could not have been more excited. Let’s take a look at UXM050 Beast. 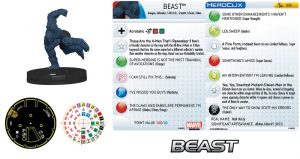 Beast can be played at either 100 or 60 points. Personally, I think he is always worth the full 100 points. His special Outwit power, “Yes, Yes, Smartest Mutant-Simian-Man in the Room,” is only available at that point level and it is outstanding! It lets Beast Outwit one power on every opposing character within four squares and a line of fire. Since Beast is such a close combat piece, this is just more incentive to throw him into the fight.

Beast is highly mobile with Improved Movement: Ignores Elevated and Hindering Terrain. Considering Beast has the ability to move and attack for six of his eight clicks, Beast will have no trouble reaching his target.

Hank McCoy has strong values in general, but his defense is worth special attention. His 100-point dial starts with a printed 18 defense value and “A Fine Form Indeed” just adds to it. This special defense power gives Beast Super Senses, Combat Reflexes, and Toughness. Beast can be VERY hard to hit.

This team should just be fun. Beast and Wonder Man were in a comic together called The Avengers Two, which is replicated in Chaos War Wonder Man’s trait. Throw Beast and Wonder Man into the fray and let them get their fisticuffs going. Because Wonder Man’s special movement power gives him the Wing symbol, he can carry Beast. Scarlet Witch supports the two with her Probability Control and “Hex Magick” trait. I would also add an ID card for a ranged attacker like Iron Man or Hawkeye since that is what this team lacks.

This team is pretty straightforward. Namor is your main attacker. Use Beast’s Outwit to make sure Namor’s damage sticks and then follow up to finish your target. Doctor Strange is your ranged attacker and support, especially with his Probability Control and Protective Aura trait. I would recommend throwing on two ID cards with the last ten points.

I played this team a few weeks ago and was surprised how hard hitting it is. Iceman is a mobile ranged attacker who also ties up your opponents. Wolverine and X-23 are durable close combat pieces. Pixie is a taxi, transporting the whole team around at once. When I played this team, Beast was more brains than brawn. His Outwit was a huge bonus to the attackers on this team. But, if necessary, Beast can land a punch or two himself.

This is a quick look at UXM050 Beast. I love this piece. He plays just like the character, bringing in a great mix of the brilliant scientist and the acrobatic simian. If you’re a fan of Hank McCoy like I am, track this piece down!