There are few cards in Shadows Over Innistrad that sent my mind racing quite so much as The Gitrog Monster when it was revealed. First off, Golgari (that’s green/black if you weren’t aware) is hands down my favorite Ravnica guild. A shambling zombie emerging from a pile of flowering corpses is my spirit animal. Well uh…metaphorically speaking in Magic terms. Don’t look at me like that! It’s perfectly normal and healthy to have weird ideas like that! Moving on! 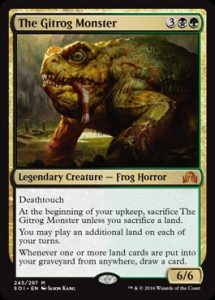 Totally normal! ALL GLORY TO THE GITROG TOAD!

I had been rolling around ideas for a Commander deck tech for this bad boy for a while, but the problem was…there are precisely thirty seven billion commander articles for The Gitrog Monster out there (go ahead and count, I’ll wait), and I don’t feel there’s anything I could add to those. BUT! Standard is my second favorite format, and I consider myself a pretty solid deck builder. I’m going to generate a couple of deck ideas for you here, one purely for fun, and one that I’m going to attempt to make competitive, at least on an FNM level. Both of these decks will feature four Gitrog Monsters, because he’s our feature card! I’m not planning to work within a certain budget, but of course you can always make budget selections if you need to. For example, if I recommend using Jace, Vryn’s Prodigy, consider using Reckless Scholar instead. So let’s get started!

This deck turned out to look a bit more competitive and fun than I initially set out for, but let’s break it down and see how everything works in tandem. As you can see the main focus of this deck is the new mechanic, Delirium. All you simply need are four different card types in your graveyard, and extra perks can be triggered with many cards. Utilizing tools like Evolving Wilds, Vessel of Nascency, and even Corpse Churn will help us hit Delirium very quickly. Theoretically we could hit by turn two courtesy of the Vessel, but I’m more often imagining the first few turns going as such: Turn 1 Vessel, Turn 2 pop the Vessel, Turn 3 Evolving Wilds, fetch a land, play a 3/4 Mold Scavenger, or an Autumnal Gloom that’ll be a 4/4 Trample Hexproof creature at the end of turn. Then next turn you untap and toss down a Mindwrack Demon, and follow that up with the Gitwrecked Toad, and you’re off to the races!

Since The Gitrog Monster is the star of the deck, let’s look at how some of these cards interact with him. First off, anything that dumps cards directly into your graveyard may as well be considered to have a cantrip attached to it. Corpse Churn basically reads “Put the top three cards of your library in your graveyard, return a creature to your hand, draw a card.” Fork in the Road reads “Search your library for a basic land, then draw a card”. And so on and so forth. The Monster itself will net you an additional draw per turn thanks to the sacrifice requirement, but it also allows you to play additional lands so you’ll have all the mana you need to play all those fresh cards you’re drawing.

Is all the additional drawing filling your hand with more land than you can play? Fear not! Call the Bloodline is the ridiculous card here to save the day! With Gitrog on the case this card reads “Pay one mana: get a 1/1 lifelink vampire, draw a card”. Sure you can only do that once per turn, but you can do it on both your turn AND theirs, and you get a Gitrog trigger each time you discard a land. What would a Gitrog deck be without Drownyard Temple? It’s a land that never stays gone, and can return each and every turn to be sacrificed for additional goodies to feed the toad. But wait! There’s more! If you flip over the temple on turn two with a Vessel of Nascency or a Corpse Churn, on turn three you can pay to put it directly into play effectively making it a ramp spell, then on turn 4 you drop a land and play the Gitrog Monster. Of course Deathcap Cultivator also helps you cast the Monster a tad earlier too, and considering that you should have Delirium active very early on, the Cultivator should always trade up with larger creatures.

I simply tossed this one together for fun, to make a casual deck that shows off the Gitrog Monster while being a little fun to boot. But what I ended up with is an eyebrow raising work that I think I’ll have to toss together and test a bit to see how it actually functions. I love the Delirium mechanic, I love tossing stuff into my graveyard for my own benefit, and I love this big freakin’ toad. Look at him/her/it! It’s a giant amphibian with an arm hanging out of its teeth! As if to exemplify just how amazing and lethal this monster is, Wizards decided to toss Deathtouch right on the card. When will it ever need that? Rarely will you need to trade UP with another creature, but hey, at least the option is there! This build surpassed my expectations, but let’s move on to the build that I’m specifically gearing to be more competitive, and let’s see if we can outdo it. Though I’m certain the two decks will share a number of cards.

So here’s a little problem I have. Thanks to Oath of the Gatewatch whenever someone says the word “Green” my mind immediately associates “Sylvan Advocate”. Look, it’s the best two drop in Standard right now (besides Jace, but Jace isn’t $7 like the Advocate), helps to mitigate aggro with its three defense, and mid to late game it becomes an unstoppable force that makes your man lands difficult to deal with. Good luck to your opponent if you have multiple advocates on the field at that point. The creature base is much the same as the previous deck with a few exceptions.

We’re obviously trying to enable Delirium ASAP here as well as get extra card draws off the Gitrog Monster later on, so Pale Rider of Trostad does a reasonable job, and a beefy 3/3 for two mana ain’t too shabby either. Jace, Vryn’s Prodigy is up next. I mean, we’re playing blue, we’ve got a little madness going on, and we’re trying to enable delirium. We can’t NOT play Jace. Well, unless you can’t afford the ridiculous $90 price tag, at which point Reckless Scholar can accomplish some of what we’re looking to do. The last thing that differs here is the Profaner of the Dead. NO ONE plays this card, but it’s a hell of a way to get things swinging in your favor. Look, it’s a four mana 3/3 at its core, BUT you can sacrifice it or another of your creatures to clear your opponents board, and ONLY your opponents board. That’s assuming of course that their creatures are on the smaller side but even if they’re not, late game you could sacrifice a Sylvan Advocate, Mindwrack Demon, or even the Monster itself to get the big ones off the board.

Moving on to the spell package, I’m sure you’re raising an eyebrow or two at my choices here. Let me lay out my reasoning. First off, I feel that Kiora needs some love. Her abilities are really solid, with her second ability letting you dig for a creature and/or land, and ditching the things you don’t want into your graveyard. So basically she can net you three cards when the Gitrog is on the field, with you choosing a land and a creature, then ditching another land to the graveyard for a Gitrog activation. I really, really like her for this deck. Grasp of Darkness is there simply because it’s Grasp of Darkness and will kill most threats you’ll run up against. I chose Just the Wind because of its Madness ability that pairs so well with Jace and other discard enablers like the Pale Rider, and Ultimate Price will pick up where Grasp and Just the Wind aren’t able to cut it. But then we move on to a card I have a real affinity for: Epiphany at the Drownyard. I’ve always loved Fact or Fiction, and though that card is strictly better in most cases, late game it’ll help to give you a lot more options, plus it helps augment all the drawing you should already be doing thanks to our feature card. Last but not least we’ve got Silumgar’s Command, simply because it’s Silumgar’s Command. ‘Nuff Said.

The Gitrog Monster is a hell of a creature for five mana, and I’m positive it’ll definitely see standard play at some point beyond a one-of or maybe even a two-of in the occasional deck that almost gets there. The current standard environment is in flux, which is a welcome change of pace from what it’s been for some time now. I’m not sure if or when decks like these will be viable beyond FNM, but I’m excited at the prospect of cards like The Gitrog Monster making a splash. Perhaps my favorite five mana frog friend will even develop its own archetype! I’m going to keep my hopes up as I brew and brew, trying to hit on a deck that I could take to more competitive events. I’ll be eagerly following Gitrog’s career in standard, and I’ve already got my Gitrog Commander deck built! I’d be eager to hear what you have to think, either about the decks I tossed together here, or about the Gitrog Monster itself. And if you end up building one of these (or something similar) and take it to an FNM or other vent, let me know how it goes!

This entry was posted in Magic The Gathering and tagged Butterworth, Decklist, Jamie, MTG, Shadows Over Innistrad, SOI, Standard. Bookmark the permalink.