Welcome back to my Journey Into Nyx Analysis.  I’ve heard some feedback and the people have spoken, time to get serious.  In part 1 we took a look at some of the current powerhouses of Standard and tried to find some cards that might provide a solution to some of the current decks of standard.  In part 2 we played around with some (a lot) of deck lists and tried to essentially just throw stuff at a wall and see what stuck.  Now for Part 3, we will be diving into some early successes and failures of JOU Standard.

Let’s start with my favorite

Ah, finally a golgari based deck doing work in Standard.  Jarad, Golgari Lich Lord has been sad for so long!  Unfortunately, this man is not apart of the deck we’re looking at, but that’s a whole different story.  With the addition of Temple of Malady, G/B now has it’s much needed scry land, and there was no doubt some very powerful cards in this color combination that people have not been playing for this reason alone.  In fact, a good mana base is the most important thing in a deck, and a big reason to play this list.  Not only does it have a good mana base, it has an exceptional one!

Certainly this is a great starting place, but what if I told you it got better? Well it does, enter: Courser of Kruphix.  This guy has already made an impact in standard, finding his main home in G/R Monsters up until this point; however, I think this deck is Courser’s real home.  Courser pairs exceptionally well with a lot of cards in our list, lets take a look at all of the ways we can take advantage of gaining a life, seeing the top card of our decks, and playing lands.

Courser’s ability to gain life off of playing lands lends us large advantages and will often cause our opponents to want our big-behind-ed friend dead, and dead fast.  Courser provides 4 Additional Outlets to Archangel, giving us some ridiculous anthem sequences when in combination with scavenging ooze.  This ability also lets us play Mana Confluence essentially for free, providing great fixing for a deck that wants to play some many cards with double different colored sources in their cmc.  It also lets us use underworld connections for free at times, which changes underworld connections text to read: “Land gains Tap, draw 2”

Figure 2: seeing the top of our library: Ajani, Mentor of Heroes Underworld Connections

I already hinted about how powerful courser is in combination with underworld connections, but lets take a look at the new kid on the block: Ajani.

One reason this guy is so great in this list is because of Courser of Kruphix.  Sure, courser only lets you see the top card, not the next 3; however, these 2 in combination are perfect for a mid-range strategy.  Against control decks, you can either make any of your guys a threat, or gain card advantage and filtering.  Against aggro decks, you can make insurmountable walls or gain 100 life!  Ajani is extremely flexible and having both of his abilities be a + is a very strong trait.

I’m not sure if I’ve hammered this home yet enough or not, but here goes.  Courser works very well with scry lands.  Playing a land from the top of your deck is essentially drawing a card, then being able to scry your next card if you so choose, is also like .5 card advantage.  This interaction helps smooth your draws and dig for whatever answer you may need, which is perfect for mid-range.

I think that Banishing Light might just be self explanatory,  so lets move onto the next interesting card in this list: Advent of the Wurm  This is an extremely interesting choice of a 4 drop, let’s consider some Pro’s/Con’s when compared to some alternatives at this slot:

This is certainly a highly contested spot, and we have no shortage of good options here.  I think the #1 reason to play this card over the others is the instant speed.  You’re able to sequence some unique interactions by having access to a 5/5 at instant speed.  You can bluff opponents from attack, force a counter spell, or even sneak him in to kill on the swing back.

If you’re like me, you might be sleeving this guy up for your next standard event, lets take a look at the sideboard plan.

Our plan vs Control is a sweet one, increase the power of our cards, diversify threats, attack their resources, land a resilient threat.  We are the tempo deck.

Our plan is to stay alive here, the longer the game goes, the better. We are the control deck.

Stay alive, deny resources, kill their threats.  We are the control deck.

Interestingly enough, these are not the only lines available for sideboard strategies, being in 3 colors gives us access to a lot of answers and as always the sideboard should be built around suring up matchups and answering the meta-game.  One example might be how in these instances we happen to the the control player a majority of the time, we could alternatively take a more aggressive stance with sideboarding and try to become the aggro decks at time. We have lines available to be able to play cards like mistcutter hydra, vraska the unseen, and Selsnya Charm, Voice of Resurgence So I really think it’s up to interpretation.

While I think I’m definitely the type of player who enjoys a good stuff deck that has a lot of game in a lot of matchups, there is another deck that I am very heavily considering right now that I want to take a look at…

What I would Change

In: 1 Elixir of Immortality

I’d also probably swap around the sideboard strategy a bit, probably not running any king cats but instead some more control oriented cards.  I think we pretty much want to be the control deck at all points in this version of the list.  Another distinct attribute about this deck is the threat pool, and I really like how diverse it is. Keranos, God of Storms might not be as individually as powerful as say Aetherling or Elspeth, Sun’s Champion, but if people arn’t playing answers for him, he could be better in spots.  Same way with Assemble the Legion, We can’t necessarily evaluate cards inside of a vacuum since the format is already so defined we have to evaluate them in the context of the competition.  If more enchantment hate starts to come about or the format becomes more creature oriented, I could very well see the same argument for an esper list, but as of now people are less prepared than they should be with enchantment hate, which should give Keranos and Assemble some very strong inevitability.   There is one more glaring detail of this deck that I’ve heard multiple opinions about: 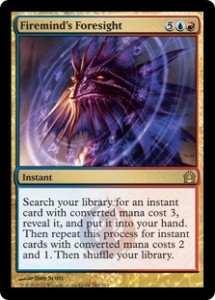 While the text on this card is quite strange, let me simplify it for you.

Some people might argue that this is not a powerful enough effect for the price of seven mana; I however, disagree.  Let’s compare it to a rev at CMC 7.

I’m not going to say Firemind’s Foresight is strictly better or worse here, but I do want to bring up how drawing 4 cards is probably worse than tutoring for 3 of them.  In no ways do we want less than 3 revelations, but since we have a tutoring effect, we can now potentially play more 1-of situational cards that are potentially extremely powerful in corner cases, which is honestly, right where we want to be.

What do you all think? Is Firemind’s Foresight the real deal? Is red really the right color to splash for in U/W control?  What cards or strategies did I overlook?  Leave your comments below or feel free to tell me how bad I am at this game when you see me around the shop ^_^.  Either way the feedback is always welcome.

EDD is a 31 year old Magic fan and part time blogger at The End Games.
View all posts by EDD →
This entry was posted in Articles, Decklists, Magic The Gathering, Uncategorized and tagged JOU, Journey Into Nyx, Magic, MTG, Thomas Schlegel. Bookmark the permalink.