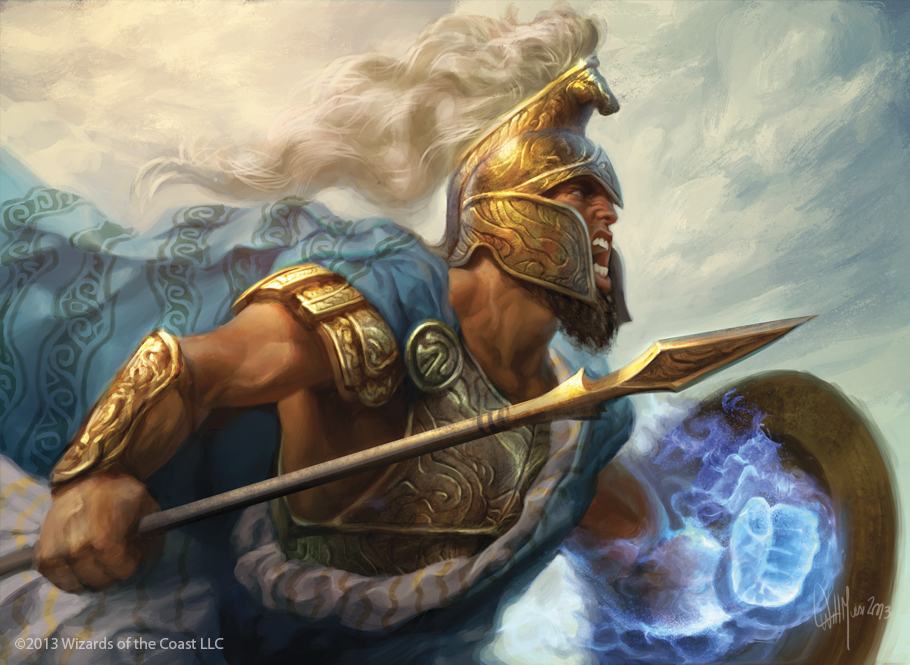 At first, heroic may seem like a weak mechanic, or at least one with very high variance. The heroic creatures are mediocre and borderline unplayable if you don’t have enablers, but playing enough enablers means that your creature count might be too low. And how will you have enough room for removal? Don’t you just lose to a problematic creature? Along with the fact that you could easily get blown out by instant speed removal, how could heroic possibly be good?

Actually, heroic is probably the most underrated ability before the release, and it is my favorite deck to draft in Theros limited. I’ve been very successful drafting it online, and I’m going to share the strategies for overcoming the weaknesses of the mechanic.

Sure your creatures might be mediocre when you cast them, but by the time your opponent has a board state, your 1/2 is now a 4/5. By then they can either chump or drop another creature and plan to double block. Next turn you suit up your creature again, completely invalidating his strategy! If you draw a good combination of creatures and enablers, most games should end by turn 5 or 6.

Note that a lot of the non-conditional removal in Theros costs six mana. Enough damage will have been done by then to avoid a blowout, so we shouldn’t worry too much about those. What we need to play around are cards like Voyage’s End, Thunder Strike, and Pharika’s Cure. It’s not a big deal if they kill our creature because those cards are always going to remove something. We just want to make sure our enablers don’t get lost as well. The solution here is to play more creatures if your opponent holds up mana and play enablers if he taps out. It’s usually better to hold your enabler until the turn you plan on attacking rather than being mana efficient for the same reason.

Gods Willing can be a nice time walk as well if your opponent decides to hold up an instant speed removal spell. You even get more heroic triggers to go along with it.

We’re beating down, so we still want to have at least 15 creatures in our deck, at least five of which should have a relevant heroic ability. We also want at least eight good enablers that also pump our creatures. This brings us to 23 cards already, but fortunately the bestow mechanic allows us to have a creature and enabler all in one card!

Removal isn’t as important for the deck, since most problematic creatures will be stuck in our opponent’s hands. Our creatures will either be big enough or have evasion to attack through our opponents creatures. Gods Willing serves as an efficient combat trick to help our guys survive combat or give them evasion to make the final blow. Keep in mind that last breath serves as a removal spell and a mediocre enabler. If we cast last breath on our Battlewise Hoplite, it’s heroic ability will trigger first, placing a +1/+1 counter on it. When last breath tries to resolve, it will check to make sure the creature’s power is two or less, and fizzle when it isn’t.

The white heroic cards grow bigger when we target them. We need this extra toughness in order to put them out of Thunder Strike and Pharika’s Cure range and to kill our opponents as quickly as possible. The creatures you want to look out for are Favored Hoplite, Phalanx Leader, and Wingsteed Rider. If you’re lucky you might even pick up a Fabled Hero. The pick order for the commons and uncommons vary depending on the cards you already have, but in a vacuum I would take Phalanx Leader over Wingsteed Rider over Favored Hoplite. Each one of these cards has it’s advantages so try to adjust your picks to tailor for the needs of you deck.

Favored Hoplite is very good at escaping removal and killing your opponent quickly. Since most of the good enablers sit at two mana, nut draws from the heroic deck usually start with a turn one Favored Hoplite. The problem with Favored Hoplite is that it’s just a 1/2 chump blocker if it’s not in your starting hand, making it the worst topdeck.

Phalanx Leader is obviously very good when you have a lot of creatures on the board. One problem with the heroic deck is deciding how to divide up your eggs. You could put them all in one basket in order to get past blockers, or you could spread them out in order to play around removal. With Phalanx Leader, not only is the effect of each enabler multiplied by the number of creatures you have, you don’t have to make the decision anymore.

Wingsteed Rider’s stats are pretty good without enablers. When your opponent is already on his backfoot, a flier with the potential to become huge can easily finish him off. I usually find Wingsteed Rider stuck in my hand in many games, though, since I’d rather enchant my cheaper creatures to get past blockers and deal immediate damage.

White also has a lot of enablers, so I’ll only talk about the commons and uncommons. I generally like the enchantments over the pump spells since they are permanent boosts. The white ordeal is probably the best enabler, followed by Hopeful Eidolon. Hopeful Eidolon allows us to completely ignore our opponents creatures if they try racing with us. This is pretty relevant in the games against an opponent with big red and green creatures facing off your Wingsteed Riding Voltron.

Chosen by Heliod may seem like a mediocre card, but a cycling enabler does a lot for us. The toughness boost helps us survive double blocks, so don’t be ashamed to main deck a couple of these if you don’t have enough bestow or ordeals. They will usually come around very late as well to help you fill out you deck.

Blue pairs with white very nicely in this format. The best reasons to play blue are for Ordeal of Thassa and Battlewise Hoplite. The Ordeals in this set are easy first picks, so don’t plan on picking them up very late. Battlewise Hoplite is a welcome creature that gets big very quickly, and the scry lets us reduce the number of lands we draw.

Blue also provides some nice filler cards such as Vaporkin and enablers like Nimbus Naiad and Thrassa’s Emissary. I would avoid Wavecrash Triton and Coastline Chimera if you can. They’re much better in the slower, defensive blue decks.

Red allows us to have some of the most explosive draws. Turn one Akroan Crusader is almost as powerful as a turn one Hoplite, and red has the best pump spells. Titan’s Strength and Dragon Mantle help us quickly win the game, and Coordinated Assault lets our creatures win pretty much every combat. I have not seen someone play Coordinated Assault lose the game.

Two-Headed Cerberus has pseudo heroic, if you need more creatures. It’s not great, but it can deal a ton of damage if unblocked.

I haven’t tried playing WG or WB heroic in Theros yet, but it doesn’t seem like there’s much reason to. Agent of the Fates could be sweet and Centaur Battlemaster gets very big, but the power of heroic comes from being fast. The creatures by themselves get outclassed really quickly and most of the enablers aren’t as relevant in a stalled board state. Stick with blue and red.

I’ll usually play 16 lands in my WR heroic decks and maybe go to 17 if I have enough scry in my UW deck.

Good luck cracking packs and look out for my draft videos for Theros! Hope you enjoyed reading.

EDD is a 31 year old Magic fan and part time blogger at The End Games.
View all posts by EDD →
This entry was posted in Articles, Magic The Gathering and tagged Draft, Heroic, Lenny, Limited, MTG, Theros. Bookmark the permalink.