Settlers of America: Trails to Rails – Board Game Review 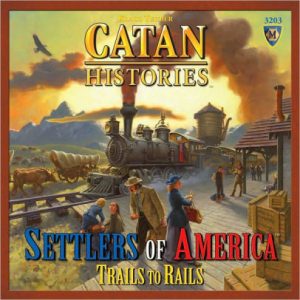 Imagine if the Oregon Trail was a board game, but your settlers didn’t get dysentery all the time. In many ways, that’s Settlers of America. This game uses familiar Settlers of Catan rules to simulate America’s westward expansion. The game comes with different colored pieces for four players, resource cards, development cards, and a map of America with Catan hexes.

The purpose of the game is to build cities and deliver your supplies to other player’s cities. City locations are already marked on the map, corresponding to prominent American cities. To build a city, you have to start with a settler. Players use resources to move settlers to undeveloped cities and they build a city there once they arrive. There’s no additional cost to turn a settler into a city. Players then build railroads to connect cities and deliver supplies. 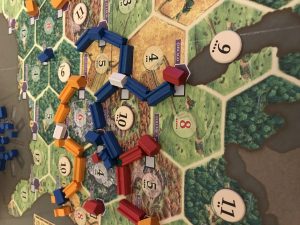 Your railroads must start from your own cities, but otherwise your cities aren’t too important for you. They’re really important for the other players, since they’ll need destinations to deliver supplies. However, each time you build a city, you unlock another set of supplies. So if you want to win the game, you have to build cities first.

Some hexes have printed numbers, while others have question marks. You put a number token randomly on a question mark hex as it’s developed. However, there aren’t enough tokens for every question mark. As new hexes are developed westward, the tokens are taken off of eastern hexes and put on the new hexes. That means you have to go west! 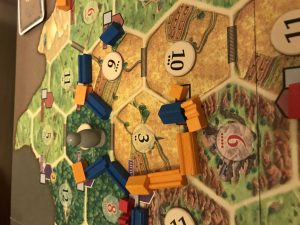 Settlers of America is different enough from Settlers of Catan to have its own flavor while still feeling familiar. Playing this the first time was different enough that I realized most of my Catan strategies wouldn’t work here. But it was familiar enough that I could focus my energy on new strategies and not on grasping a lot of new rules. Even still, this game doesn’t captivate me as much as Settlers of Catan and its expansions do, so I would recommend this game only for the most avid Catan fans. For other players, I’d suggest sticking with the standard game.

This entry was posted in Articles, Board Games and tagged America, Article, Board Game, Catan, Review, Tom. Bookmark the permalink.