Recently WizKids announced that changes were coming in Heroclix and one of the things we would see is more low-point, specialized pieces along side the general or “definitive” versions of characters. This was definitely true in World’s Finest and even more so in Uncanny X-Men. So with that in mind, let’s take a look at swarm teams.

Swarm teams are built around multiple low point pieces. An average 300-point team usually has two or three figures on it. Swarm teams on the other hand can have far more, which you will notice below.

Some swarm teams are about spreading the load. The X-Men team below does not have any generic pieces. They are all low-cost X-Men and each one has a specialized skill that they bring. If you lose one of them, it will not destroy your team. 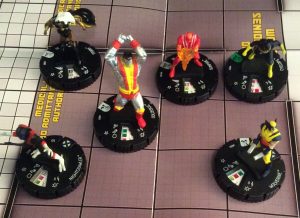 Another type of swarm team capitalizes on the boss/henchmen relationship. The Hydra team below works that way. Baron Strucker and Hive are the heart of your team and do most of the heavy lifting. The Hydra Recruits are there as fodder and support the two main pieces. In fact, between Strucker’s “Ruthlessly Pursuing Hydra’s Goals” trait and the Recruits’ “Cut Off One Head” trait, it is actually to your advantage to lose some of those fodder troops. 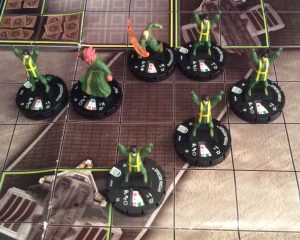 What Makes a Good Swarm Team?

So you want to build a swarm? Here are some powers and abilities that you want to gather up.

What Hurts a Swarm Team?

Your opponent has some crowd control options you should consider too. Be on the look out for these.

I think swarm teams are a blast to play! How many times have you seen the Avengers face off against a Hydra strike team? Or Batman and Robin work their way through a slew of thugs to get to the Joker? Swarm teams bring those kinds of moments to the table in a fun and exciting way.