Whether it is Beach Week after a busy semester or a summer vacation to get away from work, warm weather is here and with it our attention starts to turn to the ocean. So why not let your Heroclix games in on the action? In this this edition of Throwback, we are going to look at the undersea pieces of Atlantis.

Atlantis is a keyword shared by Marvel and DC characters. However, most of the Marvel pieces are different versions of Namor, the Sub-Mariner. Therefore, our attention will focus on DC pieces if we want to actually build some Atlantis teams. 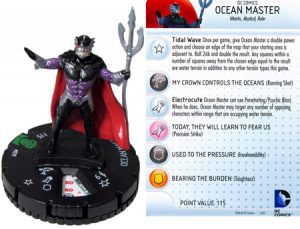 JLTW029 Ocean Master – This guy is a must play for Atlantis teams. His Tidal Wave trait allows Ocean Master to take a double power action once per game to roll 2d6. He can then flood the map twice as many rows out from one of the starting areas. You will create at least four rows of water terrain and could possibly flood the whole map. Since you cannot guarantee you will win map choice, Ocean Master lets you alter the map in your favor. Bring the ocean with you! 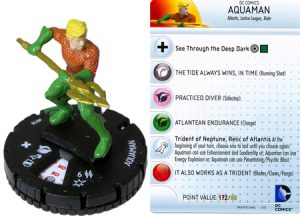 JLTW018 Aquaman – This Aquaman was a bit controversial when he released. Rather than a close-combat beat-stick, he is a ranged-combat piece with Energy Explosion or Penetrating/Psychic Blast. I think he is a great piece and his special damage power is great for Atlantis teams. “Subtle Telepathic Push” lets Aquaman use Outwit or Perplex once per turn. When he does, he can target characters with the dolphin movement symbol (i.e. most Atlantis pieces) anywhere on the map. 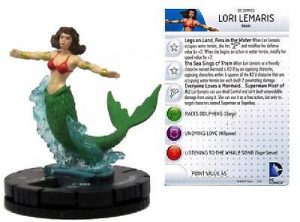 SMWW042 Lori Lemaris – Lori really needs some SMWW022 Mermaids to be effective, but she is worth it. Her “The Sea Sings of Them” trait essentially turns the Mermaids in to depth charges. When she or a friendly Mermaid is KO’d, opposing characters within 5 squares and occupying water terrain are dealt two penetrating damage. Team her up with Ocean Master and punish your opponent for taking out your minions. On top of that, she has Mind Control that does not take feedback damage with three targets. 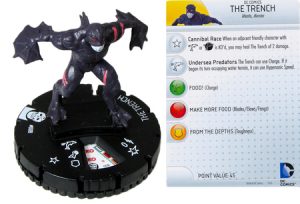 JLTW008 The Trench – Based on the early New 52 Aquaman stories, these are my favorite Atlantis generics. They are perfect for swarms. They heal two clicks when an adjancent friendly figure with the dolphin movement symbol is KO’d. If they begin the turn occupying water terrain, they can use Hypersonic Speed. These guys play like a swarm of piranhas.

With the pieces in place, let’s turn to some team ideas:

This is a pretty straight forward team. Ocean Master floods the map and serves as a ranged attacker and support with Probability Control. Sea King is a pure close-combat piece. This is a different version of The Trench. He can use Sidestep and carry characters with the Atlantis keyword. Couple that with his Empower, and he makes a great sidekick to support Sea King.

Lori and her Mermaids make the ocean a dangerous place. I would use Lori early game to Mind Control my opponent’s main attackers. Make sure to keep her alive to get the most out of those Mermaids. Use Aquaman’s Perplex to keep her defense high if you need to. Aquaman is a tough customer in his own right, so let him be your clean up crew.

Unleash the fury of the King of Atlantis. Use the three generics for tie-up and hit and runs. Ocean Master and Aquaman will deal the main damage. I like Mera for her Telekinesis, but her trait will almost certainly take your opponent off guard. Mera’s range value is equal to 1 plus the squares of water terrain she occupies or is adjacent to. Her printed zero range can be deceiving. If Ocean Master rolls well, Mera can sport a 10 range!

I think Atlantis teams are a lot of fun. It has taken a while to make them playable, but we finally have some great options. If you really want to make it thematic, consider breaking out a water themed map. Fear Itself’s Pacific Ocean, AvX’s Flooded Wakanda, and Justice League: Trinity War’s Atlantis maps are all great choices.

Don’t worry if you can’t make it to the beach. With Atlantis teams, you can take the ocean with you anywhere.