If you ask me The Punisher stole the show in Daredevil Season 2. After witnessing his brand of rough justice, I find myself wanting to break him out and deal some punishment of my own. DP032 Punisher is a versatile and easily accessible version of the character and is great for team building. 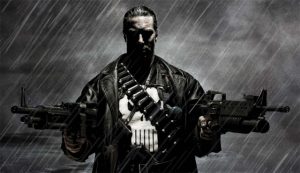 Punisher starts with Running Shot and a special power, Concentrated Fire, that allows him to use Ranged Combat Expert as a ranged combat action rather than a power action. This means you can Running Shot into place and then beef up your stats with Ranged Combat Expert (RCE). Frag Grenade allows Punisher to use Energy Explosion, which is penetrating if he only targets one character. Remember, you can use Energy Explosion even if there are not enemy figures in the splash radius. As an added bonus, because Concentrated Fire makes RCE into a ranged combat action, Punisher can use Energy Explosion and RCE at the same time. Frank can deal some punishment with this combo!

Frank’s trait, The Guilty Must Be Punished, is worth noting too. As enemy characters deal damge to Punisher’s allies, Frank gets a boost to his attack and damage values. He’s all about the revenge, right? There is serious potential here for Punisher to retaliate against opposing pieces that are causing you trouble, but it also makes him an attractive first target for your opponent.

It’s hard not to put Brother Voodoo on a H4H team when you can. His Probability Control and free action Mind Control make him a great asset to the team. Punisher and Elektra are both capable of dealing significant damage, one at range and one up close. I added the Ronin ID Card for the sheer versatility of the card and the fact that it offers access to lower point pieces that this team can call in.

Nick Fury is great support for this team while the rest of the team deals out damage. Since Fury and Winter Soldier both ignore characters for line of fire, your shot will be hard to block. U.S. Agent is a great close combat piece and his ability to block line of fire from one side can be pretty frustrating for your opponent. With the last five points, I would suggest throwing on either a Gama Bomb or an Avengers ID Card of your choice.

This is without a doubt Punisher’s most versatile keyword. There’s A LOT you can do here. This team is fairly straightforward. Mercy is all support with a short dial, so keep her safe. Centurius gives you Perplex that can modify attack values by +2. Everyone else dishes out damage, with Bullseye and Moonstone both bringing some additional support powers. For the Thunderbolts ATA, I usually choose either the Mystics of Avengers Initiative Team Abilities.

There’s a small taste of what you can do with DP032 Punisher. He’s a great team player and, whenever I have played him, he has been worth his points. At 100 points, he is easy to throw on a team. So get out there and let the punishment commence!