A couple of weeks ago marked the first Heroclix release of 2016: World’s Finest. While the set is officially centered on Batman and Superman, the set is much heavier on its subthemes: Metal Men, Doom Patrol, and Mystics. The chase theme is also a fan favorite: Kingdom Come. After cracking open a brick, here are a few of the Commons, Uncommons, and Rares that stood out.

Before getting into a few character highlights, two new features stand out about this set that are worth your attention.

1) Shifting Focus – This set offered a cool take on Batman and Superman. There are four 60-point Batman pieces and four 90-point Superman pieces. Each one focuses on a particular skillset (Batman: close combat, ranged combat, stealth, support; Superman: durability, super-speed, strength, heat vision). Put one of them on your team and the other three on your sideboard. Then you can take a free action to switch between them. For example, zip in and attack your opponent with the super-speed Superman and then replace him with the durability Superman. This keeps the point costs down and rewards players for their finesse.

2) ID Cards – Last year we saw Marvel ID Cards, which allowed you to call in reinforcements from your sideboard. I won’t go any more in depth since I wrote a whole article about them last summer. In World’s Finest, DC ID Cards make their first appearance and they function the same way. 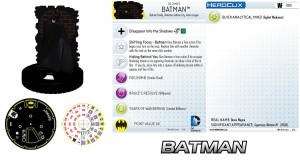 003 Batman: This is the stealthy Batman in the Shifting Focus crew. He stands out to me for his mobility. He has the “Hiding Behind You” movement power his whole dial, which makes him mobile. If Batman is in hindering terrain or no opposing character can draw a line of fire to him, give him a free action to be placed in another square of hindering terrain within six squares and line of fire. Free movement is a great way to make the most use of Shifting Focus. 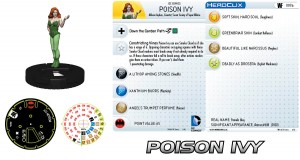 007a Poison Ivy: Poison Ivy is a cheap, effective tie-up, weighing in at only 65-points. Her trait is where the money is. She can use Smoke Cloud with a range of 6. When she does, characters occupying these squares must break away even if they would not have to normally. If they fail, they receive an additional action token. Throw in some Stealth and Perplex to top it off, and Ivy is a serious thorn in your opponent’s side. 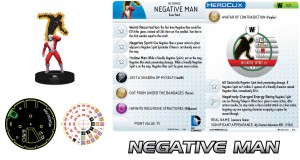 046 Klarion the Witch-Boy: This might have ended up being the best piece I played all night. Klarion is a cheap (70-point) mystics piece with a great set of powers. But his major selling point for me is Teekl. Teekl is a detachable bystander who is tough to kill. He has Super Senses but, on a 3 or 4, Teekl reattaches to Klarion rather than get KOed. I’m a bit biased, since Teekl almost single handedly took down the 200-point 049 Superman. That’s right. A demonic cat who can go toe to toe with Superman.

That’s just a glimpse. This set also has a large selection of low-cost, mystical generics to fill out your teams with some great support.

I’ll admit that I was not super enthusiastic when I first saw the set list. But as I’ve spent more time with this let, I’ve come to really enjoy it. Overall, the dials in this set feel well designed and balanced. There is a good mix of high-cost and low-cost figures so it is easier to build bigger teams. There are a lot of characters who were in need of updates. I’m looking forward to getting the last of the Metal Men and running them as a swarm. The Doom Patrol looks like a lot of fun.  The set even offers a fresh take on common characters like Batman and Superman. In my opinion, this set has turned out to be a strong start to the year.