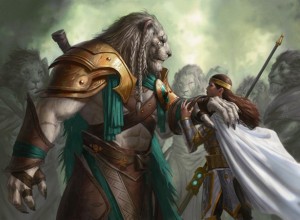 I’ll be continuing from where I left off with last time with the Journey to Nyx Draft format. Today, I’ll be covering UB control, and green based midrange decks.

One issue with UB control was the lack of cheap removal in Theros. Voyage’s End and Griptide, although always playable, were much better in tempo decks, whereas UB control wants to get rid of creatures permanently. Pharika’s Cure wouldn’t always get the job done, especially behind curve against a turn one Favored Hoplite. In JOU we’ll look for cheap creatures with three toughness and cheaper, better removal.

UB control gains great defensive options. Not many decks will want Pin to the Earth, since it only negates attacking, but it is exactly what UB control wants in the early game. The card can easily be a two for one if the target has a creature bestowed on top, and it’s also a good answer to a fast early start from a heroic deck. Look out for God’s Willing when playing this card, though. If your opponent is strangely putting more enchantments on your target, he might be looking to crash through for a large amount of unexpected damage.

Feast of Dreams is premium removal but unfortunately it won’t come around as late as Pin to the Earth. Aggressive decks shouldn’t want this card though, since it doesn’t do a good job removing blockers. Again, it’s a perfect option for control decks, as creatures without enchantments on them are usually easily dealt with by the control player’s defensive creatures.

The two three mana removal spells, although not necessarily premium, do get the job done in stemming the bleeding.

Sigiled Starfish is probably my favorite card from the new set. It does everything I want from a defensive two drop: block other 2 drops, dig for lands or important spells, and gain incremental value. Returned Reveler has decent stats and I would probably include it over something like Fleshmad Steed against most decks, but I wouldn’t be happy playing it. Felhide Petrifier on the other hand, is so much better than Felhide Minotaur. Playing a 2/3 on turn 3 against two 2/2s is usually fine, but won’t do much in a format with so many pump spells. Deathtouch makes it much more difficult for the opponent to attack favorably into you. Overall, I’m very happy with the defensive options UB gains from JOU. Let’s take a look at the card advantage engines and win conditions.

This department is disappointing. Black has no commons or uncommons that win the long game, and two of the blue cards are garbage by themselves. Font of Fortunes is fine as card draw, but on average is probably worse than both Divination and Read the Bones. Riptide Chimera can be good but you need a lot of cycling enchantments, which UB typically does not want. Triton Cavalry could be cool, but again, it doesn’t win the game by itself.

Dakra Mystic is the only exciting card here. It might not seem so great on the surface, since you’re allowing your opponent to draw cards, but when you’re behind on board it’ll help you dig toward your answers and when you’re ahead, you decrease your opponent’s chance of finding their answers. It’s great that you can play this card early and gain incremental advantage, and this even messes with your opponent’s scry! If your opponent scrys a card to the top, you can mill it before they get to draw it.

Keep in mind that BNG didn’t have many great options for the archetype either. Oracle’s Insight and Aerie Worshippers were cards that UB drafters wanted, but they were both at uncommon. Losing out on win conditions and card advantage engines isn’t terrible, though, since a UB deck can still ride a victory off the back of a couple of Prescient Chimeras. It might even be favorable, if people are drafting the aggressive black cards and not drafting blue (blue seems much weaker in JOU than in BNG and THS), allowing UB be more open in the final pack.

Some of the rares are exciting and definitely helps UB control. The best way to move into the archetype might be first picking one of these cards: Dictate of Erebos, Scourge of Fleets, Doomwake Giant, Feast of Dreams, Daring Thief, Hypnotic Siren, King Macar, the Gold-Cursed, and Silence the Believers.

Green is best paired with either blue or black, so we’ll take a look at each of those combinations shortly. First, we’ll discuss what makes green midrange a viable strategy. Two of the best cards green loses are Voyaging Satyr and Nessian Asp. Voyaging Satyr was an irreplaceable card from THS, allowing green players to accelerate to their fat creatures. Nessian Asp held up both the ground and the air. It’s five toughness put it out of range of both Lash of the Whip and Rage of Purphoros. The option to make it monstrous and start beating down as an 8/9 was just icing on the cake.

One problem with green in THS was the lack of relevant two drops. Leafcrown Dryad and Voyaging Satyr were the only good two drops, but they were both premium and rarely tabled. BNG introduced Swordwise Centaur, but the double mana symbol made certain draws awkward.

In JOU green will be looking to pick up a replacement for Voyaging Satyr, relevant two drops, and well-costed and resilient creatures.

JOU introduces many great cheap creatures that green really needed. Although probably worse than Voyaging Satyr, Golden Hind and Font of Fertility is welcomed. Tapping for green is worse than untapping a land, but Golden Hind has a relevant body that allows it to trade with another creature later in the game.

Unfortunately, JOU doesn’t have as many relevant creatures or beaters. The two 6 drops are pretty unplayable. I’m never happy playing Vulpine Goliath, and these seem of similar quality. Nessian Game Warden is basically worse than Nessian Asp and is very replaceable. The cheaper creatures, with the exception of Spirespine are on the defensive side, which is not where you want to be in green. Green’s lack of removal means that it can lose to something as simple as an Aqueous Form. The best way for Green players to win in THS is to overwhelm the opponent with big beaters.

UG relied on bounce spells Voyage’s End, Griptide, and Seagod’s Revenge to stay ahead on tempo while the large efficient green creatures such as Swordwise Centaur, Nessian Courser, and Pheres-Band Tromper attack unopposed. Along with the midranged green creatures that UG loses, a pack of bounce spells are gone too. Here are the blue cards that the archetype gains.

Blue makes up for what green lacks nicely in UG: efficient beaters. Crystalline Nautilus on a flyer while the opponent is tapped out is a huge swing; Clocked Siren and Fleetfeather Cockatrice are nice fliers that help finish off the game; and Whitewater Naiads gives the big ground creatures a way to get in damage. We do see a lack of bounce spells, unfortunately, and the general lack of removal means UG will have a hard time racing a Wingsteed Rider with a Hopeful Eidolon attached to it. On the bright side, Aerial Formation and Whitewater Naiads helps get past blockers, so maybe the bounce spells aren’t as necessary.

GB typically plays the attrition game. Use the black removal spells to kill actual threats and watch as the bigger green creatures outclass the opponent’s irrelevant 2/2s. One problem with GB in BNG draft was the lack of good unconditional removal. The best available was Sip of Hemlock and Keepsake Gorgon, and GB will lose a pack of those. Here are the cards that black adds in JOU:

Again, black introduces Feast of Dreams as very close to unconditional removal, but it’s unlikely that this card will go around late. Spiteful Blow, on the otherhand, can replace Sip of Hemlock, so the removal suite does get a little better.

Pharika’s Chosen, Felhide Petrifier, and Grim Guardian all do a good job negating the opponent’s creatures, but black doesn’t have much to offer in the archetype in terms of creatures. Nyx Weaver seems pretty sweet, and it’s nice that only the black green drafter will want it, but since it’s an uncommon, it will only make an appearance once in a couple drafts.

Overall, I think the format will slow down a bit, with fewer Ordeals and slightly better removal. There also seems to be more cards that punish bestow creatures. Before, all you had to worry about was getting hit by Setessan Starbreaker, but with Pin to the Earth, tap effects like Thassa’s Ire and Akroan Mastiff, Hubris, and Feast of Dreams, there are plenty of cards that punish bestowing. Hopefully, this means that gameplay in JOU drafts may require more skill and decisions to make.

There are more black aggressive cards in JOU, which means that fringe archetypes such as RB Minotaurs and BW might be more playable. Definitely look to trying out those color combinations and see how they do.

Thanks for checking out my content and good luck cracking Ajani’s!

EDD is a 31 year old Magic fan and part time blogger at The End Games.
View all posts by EDD →
This entry was posted in Articles, Magic The Gathering, Uncategorized and tagged Draft, JOU, Journey Into Nyx, Lenny, Limited, Theros. Bookmark the permalink.