At a first glance, blue seems very powerful. You have a lot of aggressive flyers, good counterspells, and excellent card draw in a slower format then previous core sets. It seems like blue increased in power level while the power of other colors decreased from M13.

I wanted to test my theory with this deck from my first core set draft:

Matches (The place where I drafted mixes pods and plays 4 rounds, so it’s possible to play against certain strategies multiple times. Although you don’t get to have a good idea of what’s in your opponents deck since they might not have been in your pod, the decks you play against in later rounds are much more powerful and consistent.)

This match wasn’t very interesting, but in game 1, I played T3 Scroll Thief, T4 Scroll Thief, and proceeded to draw three cards per turn for the rest of the game. Game 2 ended in similar fashion.

This is a pretty scary matchup for blue, because your remove doesn’t permanently deal with slivers. Auras don’t work very well when the problematic creature still pumps the entire team. I imagine the nut sliver deck will beat the nut blue deck most of the time. Fortunately, he did not have the nut sliver deck and I was able to win games 1 and 3 with Scroll Thieves and tempo swings.

I sided in disperse since instant speed removal can be an easy blowout against a sliver deck.

The sliver deck is overrated in my opinion. All of the common slivers are in green, red, and white, but if you’re playing a three color sliver deck, well, you’re playing an aggressive three color deck with very little fixing. Don’t be surprised when you get color-screwed every other game. If you end up playing two colors, GR is probably the way to go. Battle Sliver and Predatory Sliver are premium cards that are okay by themselves, so it’s fine to pick them up early, but you don’t really want to be drafting Striking Sliver or Blur Sliver unless you already are fully immersed into the archetype. My best advice for drafting slivers is to let it flow to you. Don’t try to force it because an eight-man table cannot support two sliver decks.

My opponents deck was very good, although very greedy. He had three Chandra’s Outrage and two Archaeomancers, but was only running 17 lands in a deck with many expensive cards. Luckily for me, he was punished in game 3 when he couldn’t find his second red source. This is a matchup where Scroll Thief shines: card advantage is so important in this matchup, and against a creature light deck, my opponent had to use premium removal such as Chandra’s Outrage on Scroll Thief.

Since it was more likely that my opponent would win the long game, I sided in the 4th Charging Griffin and Negate for the Trading Post and the Wall of Frost.

UR control was my favorite archetype to draft in M13. Searing Spear was excellent in that format, and Archaeomancer had a lot of good targets. The reason it worked out so well, though, was that one of the main win conditions was Vedalken Entrancer. There’s no card similar to Vedalken Entrancer in M14 (millstone is not good because it can’t block), so you have to rely on flyers win. While UR is still powerful in M14, I think white pairs up a little better with blue if you take advantage of all of the flyers and defensive ground creatures.

My opponent had very creature light deck but tons of removal and card advantage. Fortunately, I could keep up with him on cards and apply a bit of pressure here and there to incrementally turn the game state in my favor. When you and your opponent match each other with card advantage, the player applying pressure usually beats the player trying to find answers.

Again, I sided in the Charging Griffin and Negate but this time for Wall of Frost and Sensory Deprivation. 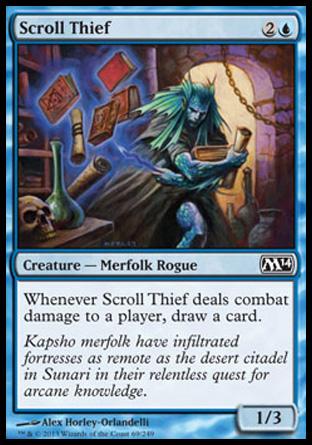 Scroll thief was one of my favorite cards in M13 draft, and it only got better as the format slowed down in M14. You could say it’s a pretty high variance card: on turn three it could be insane and just lock your opponent out of the game, but it’s not a very good topdeck on turn 10.

Well, most of your three drops won’t impact the board very much later in the game anyways, but if you trade aggressively and try to keep the board clean throughout the game, a late scroll thief could be one of the easiest ways to win. Now the only problem left is to make sure your turn three scroll thief gets in. If you look at the commons in this set, you’ll notice that there aren’t that many two drop creatures, and most of them are 2/1s that don’t block Scroll Thief very well. There are plenty of three drops that block Scroll Thief but that’s where these cards come in. 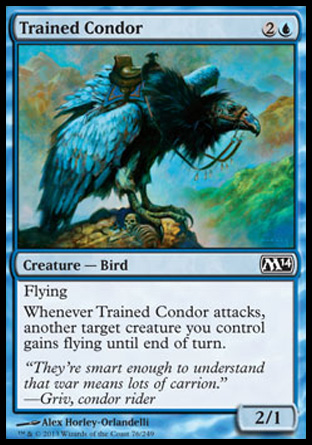 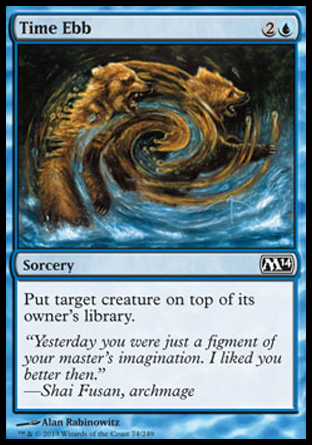 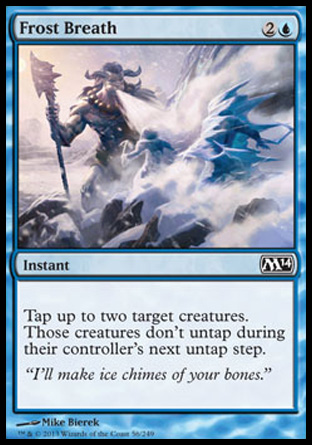 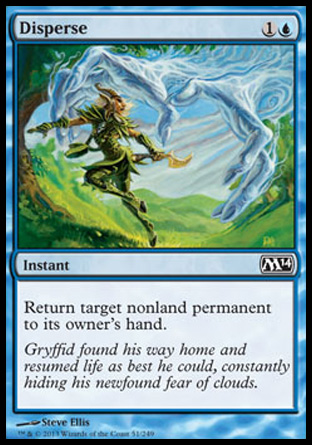 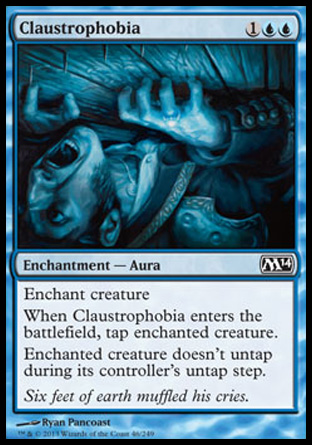 Here are all the ways that Scroll Thief can get in at common and only in blue. These cards all come very late, and I wouldn’t be surprised to wheel any of them. These cards are very good by themselves (Time Ebb is almost insane) so you don’t even need to have scroll thief to pick them up. 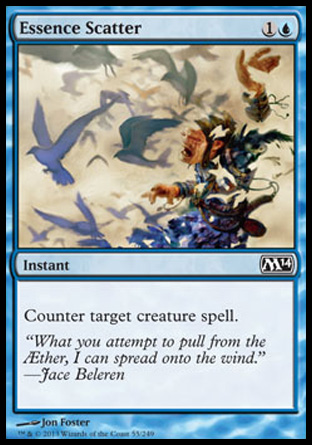 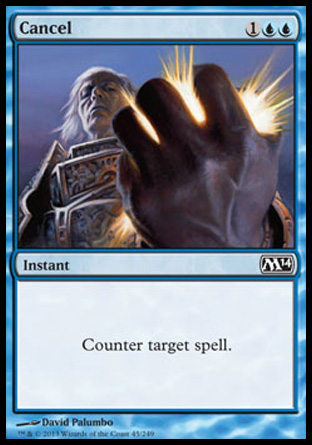 I wasn’t able to pick up any counterspells during the draft because I valued removal and most creatures over them, but Essence Scatter and Cancel are both very good. Remember, in a slower format, counterspells are similar to removal. You also have Nephalia Seakite at common to flash in so you don’t lose time holding mana up. 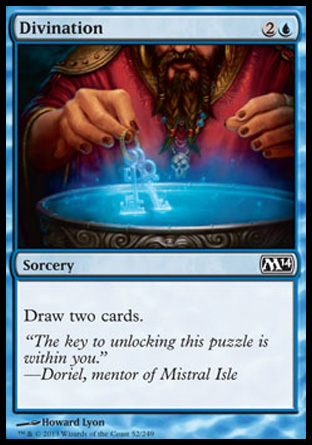 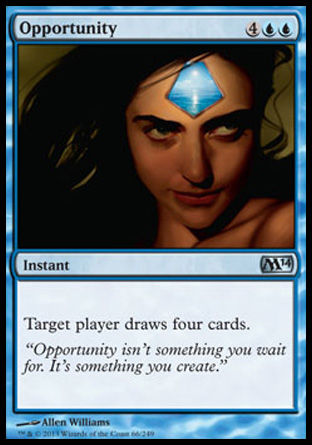 Along with Messenger Drake and Scroll Thief, you have Divination and Opportunity. One of my favorite things about card draw is that I can afford to play 18 lands without having to worry about getting flooded. With mostly a lack of two drops in my deck, the extra land really helped to ensure I played my cards on time in all of my games.

Drafting blue was one of my favorite things to do back in M13, and in M14 it’s even more fun. The slower format gives you a lot of play, and allows you to do some pretty exciting things, especially when you factor rares in. Good luck drafting!

EDD is a 31 year old Magic fan and part time blogger at The End Games.
View all posts by EDD →
This entry was posted in Articles, Decklists, Magic The Gathering and tagged Blue, Draft, Lenny Li, Limited, Magic The Gathering, Mana, Sealed. Bookmark the permalink.